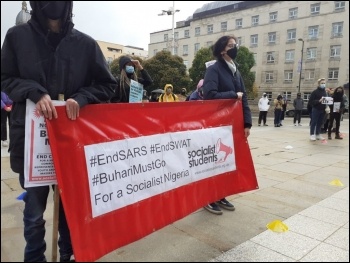 For the second weekend in a row, protesters gathered in Leeds in solidarity with the #EndSARS protests in Nigeria. Organised by the Nigerian Student Society at Leeds University and Black Lives Matter Leeds, at least 80 attended.

The Socialist Party's leaflets, including text from a leaflet given out by the Youth Rights Campaign (YRC) in Nigeria, were snapped up by almost everyone attending the protest. As well as '#EndSARS' placards being carried by many on the protest, other slogans included "Bobo has been a bad boy" (referring to President Buhari) and "Nigeria is a country with everything, but has nothing."

Esther, vice-president of the Nigerian Student Society told us: "Buhari and his government should just step down... those who've taken part in the protest in Nigeria have started something much bigger." Precious, who had travelled to the protest from York, explained to protesters how successive governments have looted the countries resources, leading several chants of "Buhari Must Go."

Marvina, from Black Lives Matter Leeds, who chaired the rally, made the important point that, as well as tackling the immediate issues of police brutality raised by the #EndSARS movement, it is also important to tackle the roots of these issues. Including the legacy of British imperialism's rule of Nigeria and the broken system bequeathed on the country.

Iain Dalton, Socialist Party Yorkshire Organiser, explained how the capitalist system is based on systematic exploitation of working-class people around the world to produce profits for those at the top of society. Capitalism relies on the forces of the state like the police to protect this system. He called for the resources of society to be brought into public ownership, and democratically controlled, so they can be planned to meet the needs of ordinary people.