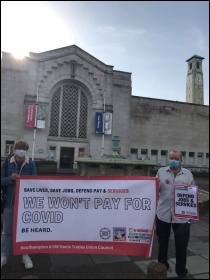 We had done a risk assessment, maintained social distancing, and wore face coverings to be as safe as possible, while maintaining our right to protest.

As local trade unionists, we believe it is important not to lower our banner at this time, no matter what some of our trade union leaders might think. We are not 'all in it together' while kids are going hungry, students are in prison-like conditions at university, thousands are losing their jobs every week, and illegal evictions are taking place making thousands homeless. We raised the demands for "work or full pay", "defend jobs and services", "feed the kids" and "we won't pay for Covid".

Our protest attracted the attention of two police officers who personally were not opposed to our rally, and indeed explained that protesting is our human right. They told us about cuts to their own service which has meant all the preventative work they valued has gone out of the window. So it would seem that opposition to endless austerity is reaching deep into society. That is why it is vital that we continue to be out on the streets, to articulate an alternative.