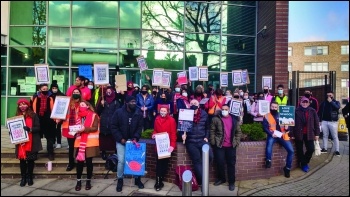 Ebullient pickets chanted "stop the expansion" and sang protest lyrics set to the Sister Sledge hit 'We Are Family' as smiling Year 11 students filed past.

Staff voted overwhelmingly against the expansion. One picket told the rally that the council's 'consultation' spoke to just 12 parents!

Socialist Party member Louise Cuffaro, secretary of the borough's National Education Union branch, told the strike rally: "We will strike until they listen!" Newham NEU has accepted the offer of talks - it's the council which has refused to engage - but plans to keep the strike on until there is an acceptable proposal.

The council has known about the need for more secondary places for six years. It's a consequence of Labour's gentrification projects in surrounding areas, combined with Labour's compliant execution of Tory austerity.

Now the council wants to cram working-class kids into an already under-resourced school at the eleventh hour. Of course, the local authority is making promises of more facilities and staff to sweeten the deal.

But as another striker told the rally: "We need those things now, even without hundreds more students. We need family liaison now. We need more teaching assitants now. We need vocational subjects now."

The need for a working-class alternative to both Tory and Labour anti-worker politicians is plain. The Socialist Party says that the experts in fighting for the working class are people like those on strike at Little Ilford. They should consider standing candidates in the 2021 Greater London Authority elections with the Trade Unionist and Socialist Coalition.

The NEU nationally should also take note. This kind of action across the country is what is necessary if we want schools to be safe. Little Ilford's next planned strike days are Wednesday 18 and Thursday 19 November.