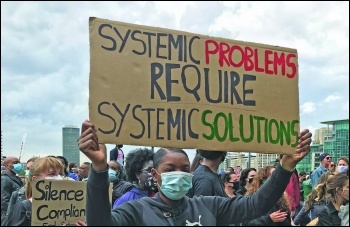 In the months after the Black Lives Matter movement erupted and spilled out on to our streets, the working class, particularly the BAME community, have seen a drastic drop in living standards. Low pay, irregular and zero-hour contracts, unemployment, underfunding and privatisation of the NHS, and the shutting down of local services, have all contributed to this.

The report finds that 25% of black voters are not registered to vote. Is it any surprise when the so-called 'elected representatives' vote in parliament and local councils for cuts? The report also finds that the Equality and Human Rights Commission (EHRC) has been unable to gain trust in tackling racial inequality, and three quarters of black people in the UK do not believe their human rights are equally protected.

This comes as no surprise, especially with the recent government appointment of right-wing writer and journalist David Goodhart, as commissioner at the EHRC. Goodhart is an infamous defender of the government's notorious hostile environment policy.

This report's suggestions are likely to end up as another empty 'tick-box' exercise. Investigations into why racist divisions exist should be conducted by democratically elected representatives from communities, workplaces and trade unions.

There is a huge gap for real political representation of the whole of the working class. Building such a party, organising in the trade unions, and fighting to raise living standards for all, is the first step to winning improvements for BAME communities. But that needs to be linked to a wider fight for a socialist alternative to this capitalist system that has inequality rooted in its DNA.