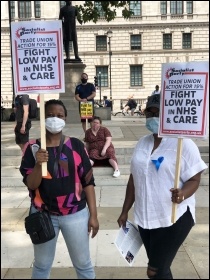 Workers have stood on the front line, put their lives at risk, and face sinking further into poverty - on top of a decade of Tory pay cuts when workers lost up to 14% of their income.

Chancellor Rishi Sunak cynically 'exempts' NHS workers from this pay cap. But they won't be fooled.

Any 'rise' for health workers will go nowhere near close to the 15% pay rise they protested for this summer. 15% would only close the gap on what they have lost in the last ten years.

This announcement takes place a decade after George Osborne's brutal austerity offensive. That cuts blizzard led to two million public sector workers striking together on 30 November 2011 to defend their pensions.

Workers need to fight together now to send the clearest message to the Tories and the employers. We won't pay the price, with our jobs and income, for your total mismanagement of the Covid pandemic and economic crisis, especially when the super-rich increase their wealth at our expense.

But us frontline key workers get told - after putting our health and safety on the line every day to provide essential public services through the pandemic - our pay will be frozen (cut).

The government's fake argument smokescreen will not pitch us against equally low-paid and essential shop and transport workers in the private sector. We will not race to the bottom alongside them.

We had years of pay freeze during austerity, that contributed to paying for the banker's bailout. When is our bailout coming to pay our rents, our mortgages, etc?

At work, management put posters up calling us 'heroes'. We all felt patronised. We wondered how the government might show their appreciation after all that clapping.

PestFix, a pest control supplies company, was added to the 'high priority lane' and awarded £350 million to supply PPE to the NHS. Clearly, we are not all in it together.

With Keir Starmer leading the Labour Party, and Frances O'Grady, leader of the Trades Union Congress (TUC) - both pally with chancellor Rishy Sunak - the Tories calculate there won't be a fightback. But there will.

But we need leaders that won't sell us out, like they did in the 2011 pension strike.

Members of civil service union PCS have fearlessly continued to support the most vulnerable during this pandemic, despite personal risk to themselves. 100 PCS members at the government's Brexit department are balloting for strike action.

We've got benefits to the jobless, furlough payments to those facing unemployment, helped the Vaccine Taskforce and Sage scientific advisors. None of this happens by magic.

If the government's intent was to further antagonise and enrage public sector workers, then Rishi Sunak has succeeded.

NHS workers were already preparing to take on the Tories. They are now joined by council and civil service colleagues rightly asking: "What about us?"

A collective response from unions - representing everyone from the probation service to librarians - must follow this derisory, insulting, broad daylight attempt to divide workers.

The price of a pandemic the Tories refused to adequately prepare for must not be put on us. We've borne the brunt of Covid, losing thousands of colleagues to this monstrous virus.

The Tories are trying to 'level down' all workers. This is an opportunity for the Trades Union Congress (TUC) and all unions to demand a 15% pay rise for all workers.

Teacher: It's a slap in the face

This year, I've re-learnt how to do my job twice - moving to teaching entirely online and trying to teach two years' worth of learning in one - with children off self-isolating.

I've increased my costs to provide my own computer and internet for hours a day to ensure I can do my job.

I've increased my stress levels. I have tried to reassure children that they will be safe in school, while reiterating that they are not allowed to see friends and family out of school.

I've shivered while teaching - opening windows to ensure classroom ventilation when the heating will not be turned up any further.

I've continued to work 70 hours a week. I want learning to retain motivation and interest, and I try to progress children in line with government and Ofsted expectations.

My union has thanked me for keeping schools Covid-secure - the reason the National Education Union (NEU) gives for why there should be no fightback. I know there's nothing secure about it - just disinfectant and luck.

I've done all that because we're in a pandemic. Everyone has to do things differently.

But to be rewarded with a pay cut, it's a slap in the face. It's not a pay 'freeze', as the government likes to term it.

The media has used schools, teachers, and education staff, as a political football all year. Now I'm told that I'm worthless too.

I don't need to be told that I'm lucky, as a teacher, to have secure employment with an income that means that I can afford food and a home. That's not luck.

That's from workers fighting for decent pay and conditions. That's what everyone should have as a minimum.

That's why a socialist leader of Britain's largest trade union, Unison, would be calling for an emergency national executive council meeting of the union - to draw up a plan of action to put to all the public sector trade unions to demand we won't pay for the Covid crisis.

Hugo also calls for "an immediate meeting of the leaderships of the public sector unions to plan a campaign of action, including coordinated strike action, to fight the pay cut proposals."