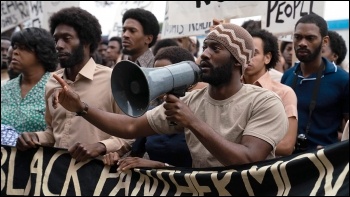 The inspirational film about Britain's most influential black power trial, 'Mangrove', was recently aired on the BBC. The film, directed by Steve McQueen, is about the fightback put up by the black community against the local police's heavy handed raids on the Mangrove restaurant in Notting Hill, west London; a place the Windrush generation saw as their 'home from home'.

After 12 police raids, the community organised a demonstration against these attacks. At the protest, the Special Branch's 'black power desk' was mobilised. The heavy-handed policing prompted violence which was used to build a case against the demonstration's leaders. Later, Home Office documents revealed this was a deliberate strategy to decapitate the emerging black power movement.

The case was thrown out by the presiding magistrate, but the director of public prosecutions reinstated the charges with 'incitement to riot'. After 55 days of the trial at the Old Bailey, the Mangrove Nine walked free. They had forced the first judicial acknowledgment that there was "evidence of racial hatred" within the Metropolitan Police.

Internationally, many tactics were borrowed from the 1970 Trinidad black power revolution and the 1968 Chicago trials in the US. The assassination of prominent US Black Panther Fred Hampton in 1969, identified by the FBI as a 'radical threat', and the false accusation trial and the public gagging of Bobby Seale by a racist judge, were all closely watched with anger. Only a few years earlier Malcolm X and Martin Luther King were assassinated for concluding the system needed changing.

The Mangrove trial was more than fighting against police racism, it set the precedent for future generations to defend their rights. But as one of the nine, Darcus Howe, is shown saying, 'complaining to police about police, complaining to magistrates about magistrates and complaining to judges about judges' is no use.

The BAME community, which is part of the working class, has to organise politically against the attacks on their rights. But London's Blairite Labour Mayor Sadiq Khan's call for 40% of new police recruits to be from a BAME background won't, in itself, solve the problem of institutionalised police racism. Police accountability requires democratic control by the local community and trade unions.

Also, the ruling class uses racism, among other strategies, to keep workers divided. As Malcolm X explained, "you can't have capitalism without racism."