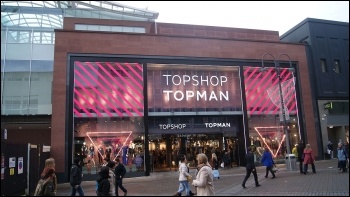 Topshop and Topman are under threat, photo Mtaylor848/CC   (Click to enlarge)

News of the collapse into administration of retail consortium Arcadia - owners of Topshop, Burton and Dorothy Perkins - with the threat to 13,000 jobs, was followed by the announcement that Debenhams department stores will probably close, axing 12,000 jobs.

Faced with such devastating job losses, the trade unions must take concrete action to force the government to halt mass redundancies and guarantee these workers a livelihood.

Arcadia's insolvency is not simply another Covid-affected high street business collapse. Its problems predate the pandemic.

Likewise Debenhams, which had already cut 6,500 jobs, had long been teetering on the brink of collapse, after years of underinvestment.

Arcadia is officially 'owned' by Sir Philip Green's wife who resides in the tax haven of Monaco. This is where, in 2016, Philip Green was notoriously photographed lounging on his £100 million super-yacht when his previously-owned BHS company collapsed, leaving 11,000 workers unemployed and a huge £571 million hole in the workers' pension fund.

Green is an asset-stripper. Like a financial vampire, he has never invested his money to build businesses but acquired them to suck out money to enrich himself.

In the case of BHS, during 15 years of ownership, Green siphoned £580 million in dividends, rental payments, and interest on loans, and then sold the company for £1.

Only after government pressure, and the possibility of losing his knighthood, did the billionaire subsequently write a £363 million cheque to stop BHS's pension fund collapsing.

However, it still meant that workers, on average, only received up to 88% of their original pension entitlement. In a rerun of the BHS nightmare, Arcadia's pension fund is £350 million in deficit.

Vulture companies are now circling to see what scraps they can scavenge from the carcass of Arcadia. The Socialist Party demands that the retail group is nationalised to save thousands of workers' jobs and pensions.

Moreover, Philip Green's non-dom tax status should be ended, and he must be made to pay back the money extracted from the labour of Arcadia workers into their pensions pot.