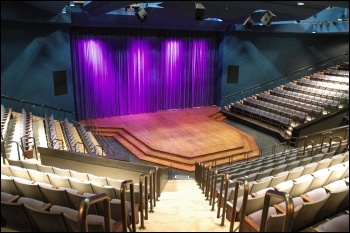 We demand more funding, work opportunities, diversity, democratic control and public ownership in the arts! These were the main calls from performing arts union Equity's online 2020 conference on Monday 30 November.

The union's 'Performance for All' manifesto put forward an alternative vision for the culture sector last year.

This will mean going outside Equity's traditional comfort zone of lobbying. Socialist Party members in Equity say it means protests - and when possible and necessary, discussing industrial action with members.

With most of the sector's workplaces shut, industrial leverage is limited for now. A motion demanding better support than Universal Credit also passed. The debate turned to calls for a 'universal basic income' (UBI).

Where arts workers - and any workers - find themselves 'resting' through no fault of their own, they should receive full maintenance. Work or full pay!

Campaigning like this is also a question of the union's survival. The successful resolution for an emergency subs increase must be matched by a drive to win back the hundreds of members lost during the pandemic. Workers join unions when they lead action.

Local government could start to implement many of Equity's policies now. All it would take is using reserves and borrowing powers to fund them, while building a campaign to get that money back from central government.

The European Union is a bosses' club. It is no friend of the unions or working people. But the brinkmanship of Johnson's Tories is putting working rights in Ireland, Britain and Europe in question, and Equity is right to campaign on that issue.

The union's new leadership team under general secretary Paul Fleming is setting a bolder tone. Fleming told conference we must "look at the merits of co-operativising, democratising - and yes, properly renationalising - our BBC." This direction of travel is welcome.

But there also needs to be a wider debate on how to fund the Beeb. Conference passed motions calling for defence of BBC funding and jobs. These did not specify defending the licence fee - but some speakers did.

Overcoming this starts with the fight for more resources - to create jobs, support and entertainment for all.