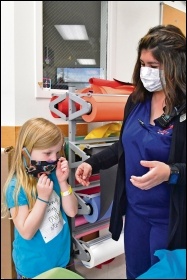 Schools are not safe, photo Todd Cromer/CC   (Click to enlarge)

Parents listened intently as trade unionists told them what management has not: it intends to cut the support staff in half.

The 'Soaring Skies Federation' in Hackney, east London, could dispose of 31 school workers. Both the Thomas Fairchild and its sister primary, the Colvestone School, would lose out.

This is an attack on much-needed jobs, and on the quality of children's education, in an already-deprived area.

Trade unionists and school workers protested outside the Thomas Fairchild gates at 1pm on Friday 27 November.

Hackney's Labour council should use its reserves and borrowing powers to overcome any funding shortfall and guarantee quality education and jobs. Send the bill to Number 10, not to local authority workers who have risked their lives running services during the pandemic!

Hackney Unison has lodged an official dispute with the council. If management doesn't back down, industrial action is on the cards.