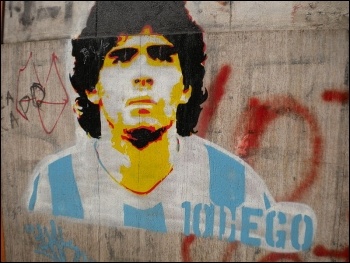 Diego Maradona, the greatest footballer the world has ever seen, sadly passed away aged 60 last week.

Football is rooted in, and interconnected to the working class. It is a physical, artistic expression of the conditions, history and development of the working class. Diego embodied and expressed this to levels of indescribable brilliance and beauty.

Diego played football like a superhuman, and did things that no other human could do, but remained human and ordinary in so many other ways. He had flaws and demons, but drew the admiration and love from ordinary people in every corner of the planet because he was one of them and never forgot it.

Born in the slums of Buenos Aires, Diego grew up in unimaginable poverty. For much of his early life, and later on the pitch, he suffered racist abuse for his indigenous heritage.

Throughout his life Diego was naturally drawn to the oppressed, downtrodden and poor. He had his greatest domestic success at Napoli, a fairly poor, unsuccessful Italian side. The much poorer Neapolitan fans suffered horrendous abuse from fans of richer northern teams. That only drove Diego to lead Napoli to their first and only Serie A titles in 1987 and 1990, as well as the Uefa Cup and Italian Cup.

In 1986 he inspired a relatively average Argentinian team to World Cup victory. His mesmerizing performance against England in the quarter final, where Diego scored probably the greatest goal in history, again was more than just a game. For Diego, it was less to do with the Falklands war, as is often talked of, and more about victory over the old colonial power.

Diego was hated by the establishment and didn't limit his rebellious nature to the football field. He was a vocal supporter of Cuba and other, albeit limited, leftist movements and governments in Latin America like Hugo Chávez in Venezuela and Evo Morales in Bolivia. He spoke out for the Palestinian masses, and against western imperialist wars and injustices.

For a person of such personal genius and skill, Diego did everything in football for his team and for his class. He always wanted to rise with them, never above them.