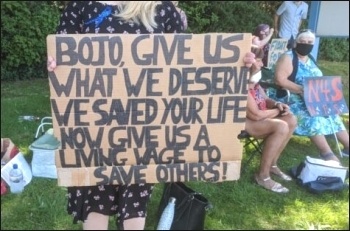 Everyone on shift feels the Tories have been an unmitigated disaster in their handling of the pandemic, whatever they voted in the general election.

"No shit Sherlock" was the response to Chancellor Rishi Sunak's 'our health emergency is not yet over' statement. What an understatement! We are beyond angry with the Tories. Extra money? Do they think we are stupid? What they are promising us is a drop in the ocean compared to the eyewatering sums they have handed out to their big business friends for substandard PPE and the like.

They keep telling us lockdown and greater restrictions are to help the NHS, but they never ask us what we need. We don't have the resources to make even a tiny dent in waiting lists.

Unlike Tory nominees who clearly have no expertise to run track-and-trace, or organise distribution of the vaccine, it takes at least three years to train nurses and other health professionals. And it is staff that we are desperately short of. Many of us fear seeing our families at Christmas - we know what Covid looks like and, even if we don't get it badly, we just can't cope with large-scale sickness come January.

It's pretty obvious that the Tories hope we'll accept a tiny pay rise, because no one else is getting one. And it doesn't help that the chair of the NHS unions, Sara Gorton, begs Boris Johnson to "show he has a heart with a pay rise before Christmas". We stand together with all key workers, not to beg but to demand action to secure the pay rise we all deserve.