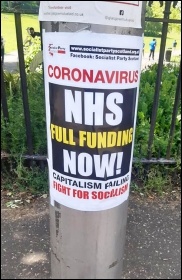 Instead, Boris Johnson and co have been busy giving lucrative private contracts to their friends and family.

£10 billion in contracts has been awarded by government departments to private companies, without competition, during the pandemic.

For example, Debbie White, former chief executive of the infamous Interserve, and an executive of Sodexo, was awarded an exclusive contract worth £280,000 to co-ordinate a network of testing centres across the UK. It reeks of cronyism.

In addition, £100 million has been spent by the government on consultants, and £12 billion has been paid out on test-and-trace which hasn't delivered.

That money could have been given directly to the NHS to expand services and resources to fight the pandemic. And to give all workers in the NHS the 15% pay rise that nurses have been fighting for.

Our money has been directed away from our health service into the private bank accounts of big business. We pay for the NHS through our taxes. Our parents and grandparents also gave their money and worked to build the NHS. They gave us something to be proud of.

However successive governments have undermined the NHS by starving it of funds.

Giving contracts to private companies threatens the foundations of the NHS and the running down of services.

It's alright for the rich, they can afford private medicine, but we can't. Many workers are only one or two pay cheques away from destitution. If you're not one of the rich, then your health relies on a free national health service that is properly funded and resourced.

Yet the NHS can barely cope in a 'normal' winter, let alone during a pandemic and a mass vaccination programme. It's not unusual to see queues of ambulances waiting to deliver patients to A&E. Long waiting lists mean that people have died waiting for treatment and operations. Getting an appointment with your GP is difficult to say the least.

But what do the Tories and big business care? They only care about themselves and their profits.