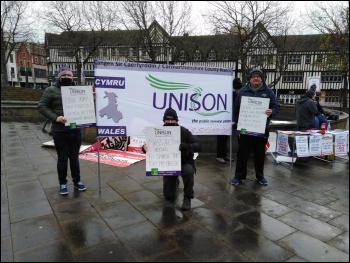 Following the recent spending review announcement, Swansea and District Trades Council called a socially distanced rally in the city centre on Saturday 5 December. The event drew together socialists, trade unionists and activists from across the city and the surrounding area. Socialist Party members in Swansea had been campaigning in the week leading up to the rally, holding three campaign stalls and selling 80 copies of the Socialist.

At the event, speakers from several unions, surrounded by banners and a crowd of around 30, called on the Tory government, and their enablers in the Labour-led Senedd (Welsh parliament), to put an end to the public sector pay freeze. Speakers spoke in support of the NHS workers' demand for a 15% pay rise, for nationalisation to prevent looming job losses, and called for trade union leaders, along with the Trades Union Congress (TUC) and Wales TUC, to organise the action needed to achieve this.

There were also calls for a new workers' party. This call, along with our Trade Unionist and Socialist Coalition banner, got a warm reception from those present.

It was explained that the event, like the one called by Cardiff Trades Union Council taking place at the same time, were only the start of a campaign. That trades councils will campaign for wider support, and continue to put pressure on the TUC to take action.

Cardiff Trades Union Council also held a loud protest against the government's public sector pay freeze outside Cardiff Castle, that blared out its message to shoppers in the city centre. Workers representing eight unions took part in a socially distanced rally, with speakers from PCS, Unite, UCU and Unison.

Katrine Williams, president of Cardiff Trades Council and a PCS Wales committee member, said that public sector workers would not pay for yet another crisis made worse by the Tories: "It is us who have kept the country going through the crisis."

A message of support was passed on from British Airways Maintenance Cardiff Unite stewards, who were unable to attend because they are isolating. They have faced wage cuts of up to £3,000 as British Airways attempted to impose savage cuts on its workforce, threatening to sack the entire workforce and re-employ them with significant pay cuts. John Williams, a bar worker from Unite, demanded work or full pay for hospitality workers in Wales, many of whom are losing pay and their jobs (see also page 4).

Renata Medeiros from Cardiff University UCU reported that the union is balloting for strike action over the lack of safety cover for university workers. She said universities are run like corporations, and both staff and students are being put in unsafe conditions.

The Tories have tried to divide public and private sector workers, but the message from both sets of workers was the same - don't cut our wages, we refuse to pay the price for the crisis!