Why I joined the Socialist Party: To take part in meaningful political struggle against capitalism 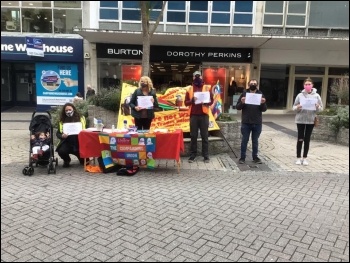 Like many new Socialist Party members, I was formerly a Labour Party member during the Corbyn years. After the energy of that movement was lost, and it became clear that Labour was no safe home for real anti-capitalist action, I began looking for an organisation that doesn't consider socialism to be a dirty word.

It wasn't until I was in Plymouth city centre, shortly after the first lockdown, that I found what I was looking for: two socialists from the Plymouth branch on a campaign stall.

After a free-flowing conversation on topics ranging from austerity Britain, food banks, revolutionary history, the US election and trade unions, I knew I had to attend their next branch meeting.

Since then, several months have passed in which I've found my energies rewarded, my ideas valued and my friendship and loyalty returned in kind. I've found a home in the party; I only wish I'd found it sooner.

In my hometown of Plymouth I've watched as the chain store monopolies have dominated the city centre, while barren shop fronts and local businesses have borne the brunt of austerity. I have seen my former secondary school conglomerated into an academy trust, and the local university become just another neoliberal institution, with dramatically falling student intake.

Foodbank use and mutual aid programmes have increased substantially and, while these display tremendous community spirit, they don't solve the systemic issues which cause such poverty in the first place.

My passion for positive change now has a platform through which to develop in the Socialist Party. During my first speech at the branch, I spoke about the importance of socialism being based in both conversation and action. Having been a passionate reader of socialist writers for much of my adult life, I am now able to put that into practice with the help of members of my branch.

The support I've received and the responsibility I've been trusted with so far have convinced me I have made the right decision in joining the party. The range of excellent talks and discussions which took place during the recent Socialism 2020 event only confirmed this further.

I would encourage anyone who wants to take part in meaningful political struggle against the dehumanising effects of capitalism, locally and internationally, to join the Socialist Party.