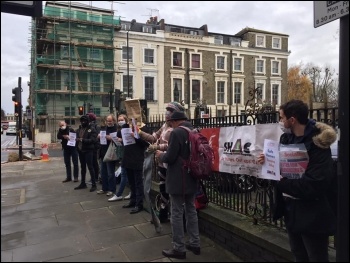 Unite members, together with tenants and housing activists, gathered outside the HQ of 'One Housing' last Friday to protest against the unfair treatment this anti-social housing association gives out to its workers and tenants.

The protest was called by Social Housing Action Campaign (SHAC), an organisation which brings together tenants and workers. Over recent weeks and months, both tenants and Unite have been in constant battle with this housing association. Incredibly, it has prevented health and safety reps from undertaking workplace visits to make sure that those workplaces are safe, and it has consistently undermined the in-house teams by employing contractors.

It has also refused to speak to tenants and leaseholders about their numerous problems, and given inaccurate reports to the local Labour MP to hide their lack of progress with repairs.

A One Housing Group tenant spoke at the protest, and brought with her a three-foot piece of lead which had fallen from the roof of a block of flats owned by the landlord. Problems relating to this matter had originally been reported to 'One Housing' two years earlier, but it had failed to act. When she contacted SHAC for help with campaigning about this, we successfully forced the landlord to act immediately.

Tenants recognised this as a victory for collective organising, with one saying: "Thank you very much to SHAC! When we as tenants and residents go to 'One Housing', they ignore us. When we join forces and link with SHAC, we get immediate results!"

The protest reported this victory as well as announcing that the first health and safety site visit was taking place at the same time as the protest. These two small victories show what can be achieved when tenants and workers link up. We know that there are many other outstanding issues, but this will give us the confidence to go further. SHAC is a necessary and growing force amongst housing activists and workers. This protest shows why.