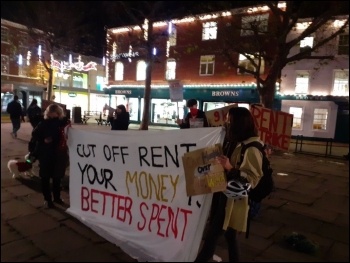 Students held a protest in York city centre against their ongoing treatment by the government and university management. The protest took place the first day lockdown was lifted on 2 December, with the support of trade unionists from York Trades Union Council. This was after an attempt to hold a protest at York St John's University campus the week before had been stopped by large numbers of police.

There was significant public support for the protest. One pensioner who passed just before the protest began, saw Socialist Students' placards demanding 'refund our fees' and commented "I completely agree". Other people out shopping now stores had reopened came up to ask questions and take leaflets.

Anger among students has grown under lockdown at how university management and the government have lured them back to campus over the summer, with promises of a relatively normal student experience. The reality is that they have been told to attend so that halls rents and tuition fees could be collected to prop up the unsustainable higher education funding system.

Two weeks prior, at the University of York, around 75-100 students had held a protest demanding rent rebates, and now 200 students in halls are pledged to join a rent strike if this and other demands aren't met.

Maurice, a new Socialist Party member and college student, spoke about how 'bubbles', designed to separate students in case of Covid outbreaks, were regularly collapsing. As students move around to different lessons they are regularly coming into contact with different 'bubbles', undermining staff and student safety.

With students being 'evacuated' from campuses ahead of Christmas, the next month will be relatively quiet for expressions of student anger. The next term will be a different matter. All those on the protest were determined to build for a bigger and more sustained movement in the new year.