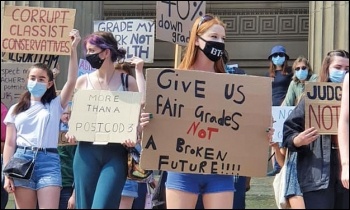 Education secretary Gavin Williamson has refused to follow Scotland and Wales in cancelling exams, justifying his decision with: "Exams are the best form of assessment we have".

This suits the Tory minister perfectly, as there is a correlation between exams and a student's family income. Professor Ira Shor remarked that universities should simply enter students' family income instead of their grades.

Williamson has shown some leniency to students. Grading will be more generous. What does this mean?

And there will be back up exams in July if students miss assessments. In other words, they are doing everything but cancel exams.

Students in worse conditions get worse grades. These conditions have only been compounded by the coronavirus crisis, which has laid bare the inequalities of capitalism.

Comparing the 2020-2021 budget to 2017-2018, the increases in per-pupil funding for children on free school meals was only two-thirds the rate of other students.

Poorer students are disadvantaged, both in and out of school. This is especially pertinent when we have been through a period of schooling at home. Exams would be an extra burden on both students and teachers, who have had more than enough stress this year.

The National Education Union (NEU) already calls for an end to "the over-reliance on exams", and instead proposes school-assessed grades based on teacher assessment.

This system provides a fairer and just as accurate - if not more accurate - measurement of knowledge and abilities compared to exams.

This government has already U-turned on the disastrous exam algorithm. With coordinated action, they can be forced to cancel exams this year.