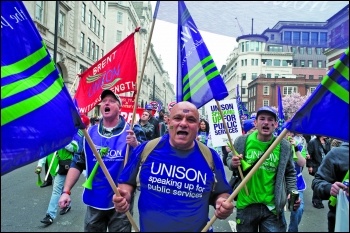 Nottingham's Labour Council faces a decisive choice: whether it defends services, jobs and terms and conditions, or implements major cuts.

The council is in deep financial difficulty due to longstanding government underfunding, exacerbated by around £38.5 million of unfunded additional costs from Covid-19. It has also suffered the collapse of its energy company, Robin Hood Energy, and failed commercialisation policies, which attempted to increase income to cover for insufficient government funds.

The collapse of Robin Hood Energy, costing the council around £38 million, led to the government commissioning a public interest report on the council's governance of the company. The report was damning, and the government then commissioned a rapid non-statutory review into wider financial and governance issues at the council, seen as a possible precursor to a process for sending in commissioners.

It also appears that the council might have already been at risk of a Section 114 notice being issued by the senior financial officer. This would mean that no new expenditure would be permitted, with the exception of funding statutory services.

The agenda of any Tory-commissioned review will never be in the interest of those who work for the council or depend on its services. This review's stated aim was to make the council a "best value authority... having regard to a combination of economy, efficiency and effectiveness" - to Tories this means cuts and privatisation.

The report published last month criticises the council for outsourcing to wholly owned subsidiaries rather than to wider private contracts, arguing that "in outsourcing to wholly owned subsidiaries, Nottingham City Council have not realised the scale of savings that other bodies have enjoyed", pointing out that savings can be made by "modernising the terms and conditions of employees".

Yet for council services and staff there have already been massive attacks. There has been around £299 million worth of announced savings since 2010, with service reductions, closures, around 250 job losses in the last year alone, and around 1,200 jobs (possibly more) lost since 2010. There has been a pay increment freeze, 'dismissal and re-engagement' of staff who did not sign new contracts, and further attacks on terms and conditions.

If the figures in the report are correct, on 31 March 2020 the council had the highest debt to net budget of all the core cities (only Birmingham and Leeds have higher total levels of debt).

In September, the council's executive board updated its projections in the light of Covid-19 and emerging issues. This is now showing budget gaps in the range of £39-54 million for 2021/22, rising to £53-64 million in 2023/24. The council officers were set the task of identifying cuts of £50 million; as yet they have not fully done so. We argue that all cuts must be vigorously opposed.

The report calls for further cuts and reorganisation, with a three-year recovery plan. It proposes that the Ministry of Housing, Communities and Local Government, in partnership with the council, should establish an 'improvement board'. Set up to include only one elected city councillor (the council leader), it would be a huge dilution of democracy.

Consistent with their failure to fight, the council leadership has accepted the findings of the report. It appears that the review team decided not to move towards sending in commissioners because they have been "impressed with their determination to fix the issue". In other words, carry out more attacks on workers and services.

This report, and the council leadership's response to it, throws down the gauntlet to those councillors who regard themselves as anti-austerity - at least ten of the 50 Labour councillors in Nottingham.

So far, these councillors have mainly been publicly silent. Between now and the setting of what is likely to be a huge cuts budget in March 2021, they need to go public in actively opposing further cuts. It is crucial that they work with the council trade unions and wider trade union movement to organise in local communities to defend services and jobs.

These councillors should build support for an alternative budget, one which demands proper government funding to meet the needs of the people of Nottingham. This campaign should link up with communities and trade unions in other areas around the country, many of which face the same prospect of cuts and job losses.

There are no Nottingham City Council elections until 2023. But it is clear that fighting, anti-cuts councillors are needed. We will be prepared to stand as part of the Trade Unionist and Socialist Coalition against councillors unwilling to fight the government to stop austerity.