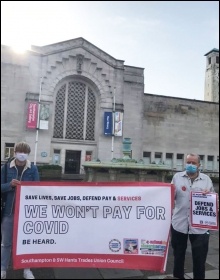 In the last week the real number of deaths from Covid has gone over 100,000, and the UK has recorded the highest per capita death toll in the world. Millions more have been thrust into poverty during the pandemic.

And what did the Tories do? Abstain in a vote that would have allowed the poorest to have just an extra £20 a week.

If you're an MP on a salary of more than £80,000 then £20 is just small change. But if you've lost your job or on poverty pay and claiming Universal Credit (UC), £20 can mean you don't have to switch the heating off or go to the nearest food bank.

The Tories say £6 billion is too much to make the 'uplift' in UC permanent. That's after spending £280 billion so far on the pandemic. Just a two-point increase in corporation tax, already the lowest of the G20 major countries, would more than pay for the increase.

The Tories are divided down the middle over the issue and, if enough pressure was brought by the trade union movement, could be forced into yet another climbdown. But this time there is more at stake. It's about who in the long term is going to pay the cost of Covid - the working class or the millionaires.