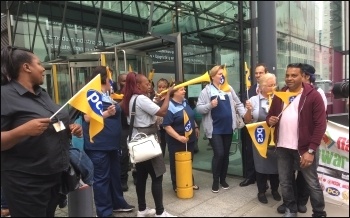 The Broad Left Network is a PCS, socialist, rank-and-file group in which Socialist Party members are active.

The conference agreed a fighting, democratic programme covering the issues of concern to PCS members - from taking on the Tory pay freeze to Covid-19 safe-working arrangements.

A new constitution agreed by the conference makes clear that the BLN is open to all PCS members who want to fight for socialist ideas, a democratic union and a leadership which will meet the challenges its members face.

The election candidates agreed by the conference include a number of Socialist Party members, including Marion Lloyd for president and Dave Semple for vice-president. The full election slate can be found at pcsbln.wordpress.com

Steve Hedley, RMT senior assistant general secretary spoke of how rail bosses were exploiting the Covid-19 crisis by attacking his members' conditions. Steve warned that attacks on the working class as a whole will increase with attempts by the Tories to pass the cost of the pandemic on to workers. It will be necessary, he said, to build alliances across the movement to resist these attacks.

Lois Austin, from Campaign Opposing Police Surveillance (COPS), gave a vivid and moving account of how spy-cops, orchestrated by MI5, had infiltrated the labour movement. She called for conference support for the demands the campaign is putting to a hearing on 26 January, for live streaming of the inquiry, and the right to cross-examine witnesses. All labour movement groups and organisations should apply for core participant status, she said.

A campaigning agenda was adopted by the conference, including how we should build the campaign to fight the pay freeze, the attacks on our pensions, and the issue that is at the forefront of every members' mind at the moment - ensuring we are kept safe during the pandemic. An emergency motion opposing the PCS leadership's attempt to hijack the 2021 PCS conference by telling branches what can be discussed, and by placing a limit on branch motions, was also carried unanimously.

Over £1,000 was raised in response to a financial appeal made by current national executive committee member and BLN communications officer, Fiona Brittle.

Marion Lloyd, as BLN chair, highlighted the work of PCS reps in keeping members safe. She said: "Members' understandable preoccupation and concern over the coronavirus will give way to anger at the way they have been treated by this reactionary Tory government. We deserve better. A BLN-led union will fight and win for members."