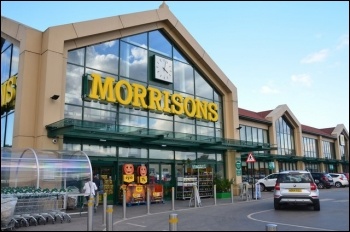 Almost five years since the £10 an hour minimum wage demand was adopted by Usdaw, Morrisons has become the first major company in which Usdaw represents workers, to accept the demand.

Undoubtedly, shop floor workers in Morrisons on the basic rate, which is currently £9.20 an hour, will welcome an 80p an hour pay rise.

However, there are caveats to the deal, which mean that many Morrisons workers will not benefit as much - or even at all. The deal is partially self-funded through the abolition of the annual bonus. On its own, the consolidation of a bonus into hourly pay can be a positive development.

However, many of Morrisons' skilled workers, and those with more responsibilities who were already near or over £10 an hour, will not gain nearly as much from the deal. Many of these are not getting any real pay rise, but only the consolidation of the bonus so, in real terms, workers may only see as little as 1p an hour more - in effect a far-below-inflation pay rise.

A worker in a Morrisons manufacturing plant told us: "My own view is that it's better to have money in your wage packet instead of the way of a bonus, because they are not obliged to pay the bonus, and it can be taken away at any time. But those who are being given a role of responsibility are being screwed over and I think there will be some who will be reconsidering their positions."

And a Morrisons home delivery worker told us: "While this is a really good pay rise for your average colleague, it's an insult to any skilled worker who was already over the threshold of £10 an hour. While delivery drivers have had a 20p rise, with them losing their entire bonus they could actually be on between £100 and a £1,000 a year less."

A majority of Usdaw members will probably vote for this deal. Undoubtedly, the anger demonstrated in the initial rejection of the 2019 pay offer has increased pressure to come up with something better this time around. But the squandering of the potential to organise a serious campaign has allowed for the offer this time to still be less than what was possible.

As we argued at the time, Usdaw needed a strategy to build a campaign among the membership to win more from management - including a meeting of lay reps to discuss a strategy and a national lobby of Morrisons headquarters.

If this had taken place, more could have been won. Like other big retailers, Morrisons has done well from the pandemic.

In the third quarter, including Christmas (excluding fuel), there was 9.3% growth in sales. The company is due to pay out a special dividend of 4p per share on 25 January, as well as being able to pay back £230 million in business rates relief.

Usdaw should raise its minimum wage demand to £12 an hour, reflecting the enhanced position of retail workers who are now seen as key workers, and following the increased profits of the supermarkets.

"I welcome the pay rise to £10 an hour that will benefit a majority of members, but Usdaw is there to represent all Morrisons workers. A sizable minority are no better off, with some even worse off when you consider, for instance, the loss of bonuses for delivery drivers.

"The supermarket sector has done well throughout the pandemic, and if Morrisons can afford to be handing over dividends to shareholders, it can certainly afford to pay more to key workers that keep their shops running. £10 an hour was adopted by Usdaw conference in 2016, so an equivalent wage now, adjusted for inflation, would be £12 an hour.

"Considering that Morrisons has been one of the lowest paying of the big supermarkets, we should prepare a campaign pushing for wages that better reflect the status of Morrisons workers as key workers, ahead of future pay negotiations to win more for our hard-working members."