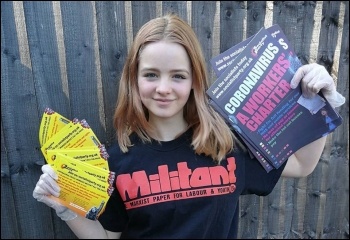 Youthful enthusiasm, experience and ideas were in abundance at the Socialist Party national women's meeting on 17 January. Over 100 women gave up their Sunday afternoon to discuss the economic, political and social impact of the pandemic. Chris Thomas gave an excellent introduction which laid the basis for a varied, inspiring and uplifting discussion, even in these difficult times.

Women have been at the forefront of struggles in the NHS, Tower Hamlets council, schools, and parent organisations. The National Education Union (NEU), with a majority of women members, has forced one of the biggest U-turns from this government. It showed that where a lead is given, members will take up the struggle. 21,000 joined the NEU last year. 17,000 in the first week of this year. They have become activists fighting for workplace safety. 400,000 people attended a Zoom meeting to organise for action on school safety.

The increase in trade union membership over the last year is majority female. It's not surprising, since threatened job losses and worsening pay and conditions have mainly hit the sectors where women predominate: retail, leisure and hospitality.

It falls mainly on the shoulders of women to home school their children, and many are expected to continue working from home. 70% of women who applied for furlough because of schools closing were refused and forced into taking unpaid or annual leave. They fear that there will be no job for them to go back to.

Speakers mentioned the impact on mental health. 90% of working mothers say their stress levels have gone up during the pandemic, and young women are three times more likely to be depressed than young men. Others spoke of the contemptuous way the government has handled the need for free school meals, resulting in some families going hungry.

A student spoke about the problems of sexual abuse on campus. Domestic violence has also increased dramatically in society. In the last lockdown, 16 women were killed by their partners. After a decade of austerity, councils will be cutting even more services, affecting women as workers and service users.

It's clear that social issues could become a lightning rod for all the other issues that are stoking up anger in the working class. Class battles can erupt in the workplace and in communities, and we need to be prepared to intervene when they do.

The meeting agreed to update our programme of demands for women in 2021 and the ongoing pandemic. It should be an important part of the coming local election campaigns, where the Socialist Party will be standing anti-cuts candidates as part of the Trade Unionist and Socialist Coalition.

We also want to take our programme on women into the trade unions. Socialist Party member Hugo Pierre, who stood as a candidate in the Unison general secretary elections, campaigned on our programme for women. We will also fight for our programme on university campuses.

This was a meeting that laid out clearly the perspectives for the coming year, and the problems we are facing, but also had the determination to fight any attacks on the working class with a socialist programme.

Book: It doesn't have to be like this - Women and the Struggle for Socialism by Chris Thomas, £7 including postage