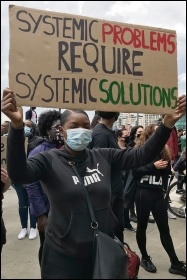 On Saturday 16 January, around 15 Black Lives Matter activists gathered by Parliament Square, in London, to protest the tragic death of Mohamud Mohammed Hassan after being released from police custody in Cardiff. Socialist Party members were also present at the protest, wearing masks and social distancing, to demand an end to racist policing and for democratic working-class control of the police.

Soon after the protest had started, an army of police officers stormed towards the crowd to tell protestors to leave immediately. Without giving the protesters any chance to discuss and decide what to do, the police threatened to make arrests.

Police used Covid-19 regulations as an excuse for intimidation. But the truth is that anti-racists protesting in the open air are far less likely to spread the virus than a bunch of police officers stuck in police vans.

Police want to use force and intimidation to put young people off protesting again in the future. It also forms part of an ongoing attempt by the government to blame young people for the spread of the virus.

The police were more careful, however, when NHS workers organised a protest outside Downing Street just two days before. Public opinion in support of NHS workers means that police could face a backlash if they chose to use Covid-19 regulations against frontline workers fighting for safety.

If the Black Lives Matter protest had been more widely publicised, it is possible that many more working-class youth would have attended. This would have made it more difficult for the police to disperse the crowd so easily.

Moreover, the heavy-handed response of the police shows the importance of democratically controlled stewarding by trade unions; to ensure all protests are properly organised, and to keep everyone safe.

Many people are understandably worried about catching Covid-19, and this is one of the reasons this protest was smaller compared to other Black Lives Matter protests.

Despite the issues around how the protests could have been organised, the police were heavy handed in protecting their fellow police officers involved in the murder of Mohamud.

We need police to be democratically accountable to the trade unions, youth and communities. This includes being able to determine policing policies and priorities, access to scrutinise bodycam footage and other data, and the ability to appoint and dismiss chief or senior constables.