Link to this page: https://www.socialistparty.org.uk/articles/31906 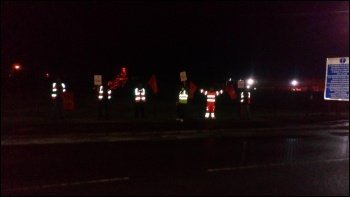 Scunthorpe: Steel site scaffolders strike for the 'rate of the job'

The British Steel site in Scunthorpe was disrupted this week as scaffolders at the plant employed by contractor Brand Energy began strike action on Monday and Tuesday in a dispute over pay.

The 50-plus scaffolders, who are members of the union Unite, are responsible for the maintenance of over 500 scaffolding structures at the Scunthorpe site.

The workers are striking to be paid in line with the National Agreement for the Engineering Construction Industry (NAECI) known as the Blue Book.

There is a difference of £2.00 an hour between their current pay rates and the established NAECI pay rates.

But since 2019, Brand Energy hasn't engaged with Unite over the pay dispute, resulting in a 100% Yes vote for strike action with six days of strike action called over the next three weeks.

The striking scaffs maintained socially distanced picket lines of six at both main gates of the steelworks.

They complained that Brand Energy is a multi-billion dollar American multinational company, yet not only won't pay the rate for the job, but penny-pinches on workers' welfare as well.

Pickets told of having to eat their dinners in their cars because of no canteen facilities and of rat infested cabins built for six - with 12 workers inside.

One said: "We had to choose between Covid and Weil's disease!" [Weil's is a bacterial infection that can be caught from rodents' urine - Ed]

The dispute is made more complex as Brand Energy will lose the scaffolding contract on 15 February when it will transfer to Activo. But now there are rumours that Activo could pull out because it put its bid in based on old pay rates that are three pounds an hour less than the scaffs are getting paid now, let alone the NAECI rate!

What the workers' strike action has showed is that they won't roll over any longer. One picket said: "I've worked here 15 years and it's the first time we've all stuck together."

If the matter is not resolved before the contract is transferred, Unite will begin balloting for fresh industrial action with Activo, once the contract transfers.

This version of this article was first posted on the Socialist Party website on 26 January 2021 and may vary slightly from the version subsequently printed in The Socialist.