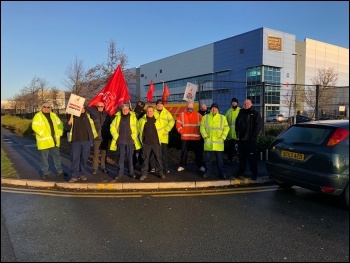 DHL workers on the Burton's Biscuits contract on Merseyside are in dispute with their employer over pay, but also because of bullying behaviour by management. This includes a number of dismissals that can all be traced back to the conduct of one particular manager.

I spoke with some of the workers on their picket line on 20 January, who told me the disciplinary procedures were a sham and the company was sending a message that it doesn't negotiate. The most recent dismissal was of a shop steward with 24 years' service and the Unite union saw this as the final straw.

One of the striking workers kindly gave a report to Liverpool Trades Council's Zoom meeting on 21 January. He told us there has been a toxic atmosphere in the workplace for a long time, but that trade union talks seemed to be making progress. However, the company reverted back to its negative culture last year, and relations have deteriorated sharply over recent months.

Unite were in talks with the company over last April's pay rise throughout 2020 and this culminated in strike action just before Christmas. The company then asked for the action to be suspended to allow it to come back with a significantly improved offer. But that didn't happen, and the angry workforce immediately returned to the picket line with two days of action and a further six days have been announced for early February.

Workers are angry and determined to make a stand. They managed to turn two lorries away on their last picket and they've received tremendous messages of support from union branches.