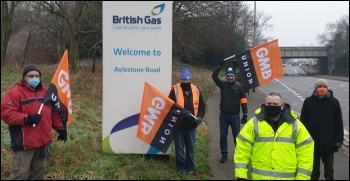 "This is a pivotal moment for workers in this country. If this happens at British Gas, if they are allowed to fire and rehire their workforce on worse terms and conditions, the contract of employment for every worker in the country is not worth the paper it's written on.

"You need to support this because you could be next. There are companies watching what is going on at British Gas at the moment with keen intent, because if it goes through here, they will be coming for you next."

"The company thought we would be wilting by now, but the opposite is happening. We are getting more and more support and media coverage. Trade unionists are seeing what is happening, and are realising this could be a tactic used by other employers."

After an 89% vote for strike action, British Gas engineers are carrying through their ten days of strike action announced so far. These workers have kept people's homes warm throughout the pandemic and have been rewarded with a vicious attack on their hard-won conditions. Many have worked for British Gas for decades, but their loyalty to their customers in not matched by their profiteering bosses. Essential workers who are risking their health are seeing big business and the Tory government treat them with contempt. And at the same time, the GMB union has revealed British Gas board members have raked in £37 million from outside work.

The trade union movement as a whole needs to stand up and fight like these workers. We need to campaign for privatised industries to be renationalised under democratic control in order that they can be planned for the benefit of all.

GMB strikers protested in Southampton on 25 January at the brutal threat to fire and rehire British Gas workers if they don't sign new contracts that attack their pay and working conditions. Engineers were angry at the threat to their futures: "They want us to work an extra 156 hours a year for no extra money. It's come as a big shock to everyone. This strike is about the threat of being fired, if they get away with this who is next?"