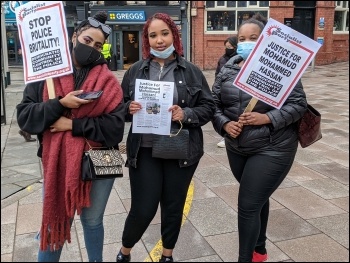 There was intense discussion at the protests and in the meeting about what must be done to end the outrageous injustice of police racism and violence. There are calls for renewed protests if the 'Independent Office for Police Conduct' investigation attempts to whitewash Mohamud's death.

Bianca Ali, who is facing fines of £1,000 by police for organising the protests, spoke first at the meeting: "Mohamud was perfectly healthy when he went into custody, but when he came out he was beaten and bruised. He went home, went to sleep, and never woke up again. The protests gave the community a platform, and made it possible for voices that never make it onto the mainstream news to be heard. Minor reforms of the police aren't going to be enough. These problems are deep-rooted in the system, and putting officers on sensitivity training, for example, isn't going to change anything."

Socialist Party member Cammilla Mngaza spoke about the campaign she has built to free her daughter Siyanda from prison: "Over 1,700 people have died in police custody but not a single officer has been prosecuted for fifty years. I am a parent of a daughter who has been wrongfully jailed because of the failures of the police, but I cannot imagine what Mohamud's family are going through. It is terrible to lose a child, but so much more painful in this way.

"There are so many of these incidents at the hands of the police and we are sick of it. My daughter is in jail, but it was she who was the victim of a racially motivated attack. We need major change. We need to talk about the need for democratic control of the police so that our communities are no longer ignored."

Socialist Party member Deji Olayinka brought condolences and reported on the brutal police tactics at the solidarity demonstration in London on the Saturday following Mohamud's death. "We must urgently discuss what needs to change to stop another life being taken from us. Today's police are not the fair and neutral protectors that they are portrayed as by the establishment. In too many cases they are the ones bringing the violence and causing the suffering, targeting especially those who are poorer and from ethnic minorities.

"Officers in Cardiff have been filmed smirking and laughing at protesters, and one even nodded when he was asked if they had killed Mohamud. All of the bodycam and CCTV footage should be released, but there are cases where we've got footage of police officers acting outrageously, and they still don't get punished.

"It cannot go on that the police remain unaccountable to the ordinary people they claim to protect.

"Our police are not just institutionally racist, they are institutionally designed to oppress the working class. They are unaccountable because big business relies on the police to break up strikes and protests to protect their profits. We've got to fundamentally change society, take the power of the state into the hands of workers, and fight for a socialist transformation that would organise society according to peoples' needs."