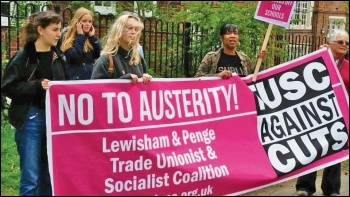 From the start of his leadership, Starmer appointed MPs to his shadow cabinet who voted for benefit cuts and war. He is now conducting a McCarthyite witch-hunt, suspending and expelling socialists from the party on the slimmest of excuses, and is continuing to withhold the whip from Jeremy Corbyn.

Our Labour Party meetings have been distorted and disrupted by diktats from central office that ban us from democratic debate and any form of dissent. This is Starmer's very clear signal that he will ditch his pledges and the manifesto as soon as he can.

Had the Campaign Group of Labour MPs resigned the whip en masse in support of Jeremy, we could have had a meaningful fightback within the party, and a reason for the many socialists who are leaving the party in disgust, to stay and fight.

Instead of a fightback, we have fear of expulsions and frantic manoeuvring to keep even the most basic democratic rights and prevent expulsions.

Staying in the Labour Party for the forthcoming elections means being represented by, and campaigning for, politicians who have cynically used the issue of antisemitism to undermine Jeremy's leadership, to smear the left, and to deliberately lose the election.

As a lifelong socialist I cannot campaign for politicians who abstained on the right of state agents to commit crimes while spying on trade unionists and socialists, or those who campaigned for a 'hostile environment' for migrants.

I am leaving the Labour Party and will be campaigning for the Trade Unionist and Socialist Coalition (TUSC), standing on a socialist programme at the next elections. The same policies we campaigned for at the last election with Jeremy.

Thousands joined the Labour Party when Jeremy became leader to campaign for socialist policies. As leader in 2017, he led Labour to achieve the biggest vote gain in a general election for any party since 1945 on a socialist programme!

If we unite and fight for a progressive programme, we can offer a real alternative to the Tories.

The Tories, with very little opposition, have hugely mismanaged the pandemic. Over 100,000 people are dead. The Tories put profits before people, failing to lock down in time, and relaxing lockdowns too soon.

Starmer has been entirely ineffective against the Tories, determined to have a consensus approach to the Tories while he attacks members of his own party, eager to establish himself as a safe pair of hands for the bosses.

As a result of the lockdowns people now understand who the key workers really are, and the terrible conditions most of them face. They see the important and complex role of teachers and their importance to society.

The school meals campaign and constant references in the media to food charities has exposed the appalling level of poverty in this very rich country. Through the Black Lives Matter movement masses of people are now aware of the embedded and continuing discrimination in this country.

We would be failing all these people if, as socialists, all we offered was a Starmer, Tory-lite government with minor reforms to keep this unjust system rolling along - for the few not the many!