Link to this page: https://www.socialistparty.org.uk/articles/31945 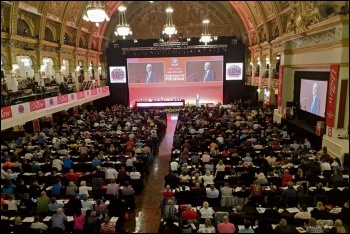 The executive council (EC) of Usdaw, the retail and distribution workers' union, agreed at its January meeting to strip back its conference, the annual delegate meeting (ADM), in 2021 to a two-day event with union democracy being the main casualty. The left minority on the EC opposed these proposals. A circular issued to branches gives no justification or explanation for shortening the ADM in this manner.

The ADM in 2020 was cancelled with no online equivalent being offered. No provision has been offered for the propositions put forward for that ADM, and with branches only able to submit three propositions it severely limits the issues that members can raise. With the number of propositions likely to be resubmitted from last year, as well as a whole swathe of issues thrown up by the coronavirus crisis, a full union conference is needed to face up to and respond to serious challenges in the retail, distribution and allied sectors.

Plans set out by General Secretary Paddy Lillis in the circular are an attempt to turn the ADM from being the 'parliament' of the union, into a rubber stamp for proposals emanating from the EC. So ADM will be able to debate EC statements, which can't be amended, as well as rule changes, including the EC's controversial delayed proposal from last year, to close the lower subs rate for part-time workers to new entrants.

But motions submitted from branches face a huge curtailment of debate. Instead of being moved by the branch and then debated by delegates, Lillis' proposals graciously still allow delegates to vote, but the only things delegates will have to go on as to how to vote will be the text of propositions and an accompanying document setting out the stance of the EC with an explanatory note.

Emergency propositions (which usually can be submitted up to a week before ADM) are banned altogether. But the last date for initial submission of propositions was 9 November 2020. There have been thousands of redundancies since then, the collapse of the Arcadia Group the threat of job cuts in Sainsbury's, the firing and rehiring tactics employed by a Tesco distribution centre in Livingston - to name but a few issues in these past few months.

Even just this week it was announced that Debenhams has been bought out by Boohoo at the expense of all stores closing, meaning further job losses for workers and Usdaw members. Yet, a proposition can't even be brought to call the union into action because of the severe curtailment of the ADM procedures.

Lillis' proposals also include plans to issue a revised temporary code of standing orders (the rules by which the ADM is conducted). It will be drafted with no clear indication as to who is going to write this code or how, or even if members will have the chance to scrutinise this revised code ahead of the ADM. Any such proposals should be put to a vote, with the opportunity for branches to debate and amend, at the beginning of the ADM.

The lack of foresight being shown by Lillis is astonishing in rushing ahead to initiate the ADM proceedings, then changing tack part-way through when it was clear that an in-person meeting of around 1,000 delegates and visitors was unlikely to be feasible, even before the second coronavirus wave took full hold.

In September 2020, the EC initially voted to temporarily suspend union elections citing their concerns about union democracy with a number of branches not meeting due to the pandemic. Paddy Lillis went over the heads of the EC and wrote to all branch secretaries after this decision was made, threatening to seek legal counsel if the decision was not overturned, trying to pose as a defender of union democracy. With the effective silencing of proposals emanating from the lay membership at the ADM, Lillis and his supporters on the EC certainly don't come across as accountable and democratic.

In the letter, Paddy wrote: "I advised the EC that they did not have authority to act in a manner inconsistent with the rules and that if they did so, I would be seeking legal advice." If it's good for the goose it must be good for the gander, so should branches be seeking legal advice seeing as Paddy's proposals for the ADM are equally "inconsistent with the rules"?

The decision to suspend elections was quickly overturned by a narrow majority at a subsequent emergency EC meeting with union elections now taking place in the midst of another lockdown. However, no provision has been made to extend the length of the ballot to account for delays in postal ballots going out and being returned.

Given the rapidly spreading new variant of Covid, the only way an ADM could take place when scheduled in April would be online. But the proposals of how to conduct such an online ADM, especially given it will be first meeting of the union's delegate body in two years, should prioritise the voice of the membership, especially over inviting guest speakers into debates on EC statements.

This underlines the importance of building the Usdaw Broad Left to challenge the current leadership of Usdaw, because there has been a concerning trend of undermining union democracy under Paddy Lillis's leadership. Branches should pass resolutions condemning the proposed changes to the ADM and call on the EC to restore the ADM back to the full four days in line with the rules.

A specific call for all propositions to be debated properly should also form part of that resolution. Members should also use their votes in the ongoing union elections to elect a fighting, democratic leadership that is prepared to face the bosses while remaining accountable to the membership.

Socialist Party members in Usdaw have written the following motion for branches to use:

This version of this article was first posted on the Socialist Party website on 28 January 2021 and may vary slightly from the version subsequently printed in The Socialist.