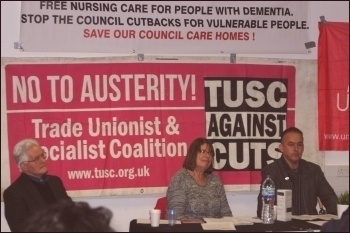 A TUSC meeting in Southampton in 2018   (Click to enlarge)

Councils are facing a new, Covid-driven cash crisis - a financial 'black hole' of up to £2.2 billion, along with an average 5% increase in council tax and other increased service charges.

Working-class communities, hard hit by more than a decade of austerity, are now facing additional cuts that threaten a 1930s-style nightmare of mass poverty.

It's vital that mass resistance is urgently mobilised to cuts, demanding full government funding to local councils. A clear socialist alternative to the Tories' Covid-accelerated capitalist crisis is needed, which can force an immediate U-turn on Johnson's weak and divided government.

Under the pandemic, council income has fallen while demand for services has risen. The Tories have failed to meet these costs, despite the £280 billion extra borrowing that has provided a huge corporate bailout for the super-rich. Clearly we are not 'all in it together'.

This funding crisis comes on top of a decade of austerity, where local councils have experienced 40% cuts - often, treacherously, carried out by right-wing Labour councils.

Working-class communities have also been hit by severe pay cuts under furlough and a sharp rise in unemployment. Consequently, Universal Credit claims have increased to six million and are rising.

Some schools have reported a sharp rise in demand for free school meals over the last three months; with families forced to turn to insufficient food banks. Many households are now officially destitute, unable to feed themselves and their families.

Even feeble opposition leader Keir Starmer has been forced to criticise the 5% increase in council tax, but more through fear of the political consequences facing Labour candidates in the May elections than any desire to fight back in defence of working-class communities.

With council budgets due to be set, Labour councillors should refuse to carry out any further cuts, and instead set emergency 'no-cuts, needs budgets', providing immediate support to hard-hit families.

Alongside dealing with the immediate impact of Covid, needs budgets could restore funding to vital youth services and provide proper support for the elderly and vulnerable. Councils should also launch a mass house-building programme, creating jobs and apprenticeships, like the 5,000 new homes socialist Liverpool council built in the mid-1980s, led by Militant (Socialist Party).

Building a mass campaign with council trade unions and local communities, along with using council reserves and borrowing powers to support their needs budgets, Starmer should demand immediate funding from Johnson and commit an incoming Labour government to restore council funding.

But throughout this crisis he has failed to seriously oppose Johnson or offer any real alternative. His shameful collaborationist policy of 'national unity' - alongside a majority of trade union leaders who have absented themselves from any working-class struggle - offers nothing to those looking to resist cuts.

The Socialist Party opposes all cuts to council jobs and services. We will challenge all those councils agreeing cuts budgets, and stand alongside others fighting back in the May elections as part of the Trade Unionist and Socialist Coalition. Join us in that fightback today.