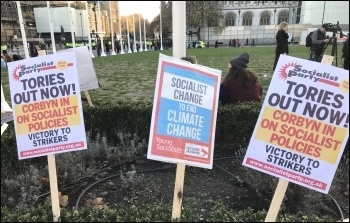 The Socialist Party in the South West held a very successful online meeting with new members who joined us in the last two months. Its purpose was to offer a question and answer session, with a couple of more experienced members taking up the issues raised.

Eight new members attended from Bristol, Gloucestershire, Devon and Dorset. Following introductions where everyone explained why they joined, the meeting fielded the first question from Cole about nationalisation and what we mean by it. Another member asked where we stood on the role of the police in society, and how that would change under socialism. Jane asked: "Where does the Socialist Party stand on the monarchy?" That one didn't take much time to answer!

Mark wanted to know about the role of cooperatives and social enterprises, a discussion then unfolded about the electoral system and our attitude towards lowering the voting age and proportional representation.

Questions were asked about how we counteract the danger of hierarchical structures developing within our party. This gave us the opportunity to explain how we operate, and the vital role of political education, as well as every member's general rights and responsibilities.

Our answers were kept short, further reading was signposted, and the topics discussed were all agreed to be good subjects for future discussions in our weekly branch meetings.

Our five new members in Plymouth were unable to attend as they were engaged in student rent strike meetings, but we will follow up this very successful initiative with a subsequent meeting geared towards them.

Political education can be challenging for all new members, but less formal formats like this encourage member participation. There's nothing better than hearing young members say, after they've heard us briefly sketch out our ideas, "that's great, that's what I hoped, and that's what I think too."