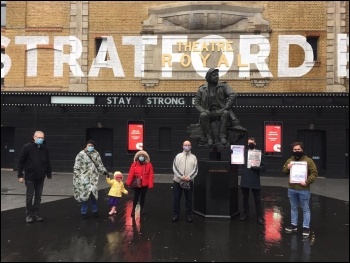 Newham's Labour council has evicted Stratford Circus arts centre. On 30 January members of East London Socialist Party joined a protest, socially distanced and wearing masks, against the eviction of the centre from its current location in Stratford. For young and working-class people in the borough, the Circus has played a vital role giving us access to the arts; whether it be performing, backstage work, or just watching a show.

Socialist Party member James Ivens, secretary of the local branch of performing arts union Equity, said: "Stratford Circus is an essential facility for both professional arts workers and local youth drama. For a Labour council to be evicting it - in the shadow of the great socialist theatre maker Joan Littlewood - is a disgrace. The council should use its billion-pound reserves to subsidise local culture, not destroy it"

With the local trades council and socialists from East Ham Labour Party also in attendance, it is clear the local community will fight the council to protect the centre. Outrageously, the eviction process seems to have been rushed through by the council with little to no consultation with the users and local community. What does the Labour council have planned to take its place?

East London Socialist Party will campaign to reinstate the lease so that the vital service can continue. But we need access to the arts and other public services to be expanded, not restricted. We say Labour councils should use their spending powers to subsidise community arts centres and other services to meet the needs of the community.