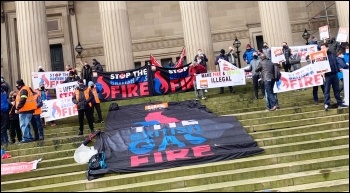 British Gas workers, primarily engineers, are currently locked in a battle with company boss Chris O'Shea over his attempts to impose attacks on terms and conditions through firing and rehiring the workforce.

29 January was the 9th day of strikes by the workers, organised in the GMB trade union, ahead of the deadline of 31 March for workers to sign the new contracts.

In Leeds, around 50 workers joined a socially distanced march around the British Gas call centre in Holbeck near the city centre. They marched in groups of no more than six, joined by a delegation from Leeds Trades Union Council including Socialist Party members.

The workers are determined to see this attack on their conditions defeated, especially when British Gas parent company Centrica reported an operating profit of £901 million in 2019.

As one worker explained, as well as trying to increase the working week from 37 to 40 hours for service and repair workers, the company is also cutting their holidays and removing premium payments over Christmas and bank holidays. Meanwhile O'Shea himself will take home an annual package worth almost £800,000 this year, twenty times the basic earnings of an engineer!

The recent victory for workers at British Airways Cargo over fire-and-rehire plans was mentioned by a number of workers and has certainly given a boost to the confidence of workers that this attack can be defeated.

Around 50 British Gas engineers took part in a socially distanced strike protest in Liverpool against unfair and unreasonable 'fire-and-rehire' intentions from British Gas execs, who hypocritically are on six-figure salaries.

A minute's silence was taken by all in attendance to remember the life of an engineer who had taken his life during these past few months.

These engineers are committed and aim to see this through to the very end, with more strikes announced.

Leicester Socialist Party members are regularly supporting the British Gas engineers picket lines on Aylestone Road. GMB members have been very visible there throughout the strike days, with banners and placards, and get constant support from passers-by, motorists and even joggers stopping to offer their support!

One picket, Rob Greenhalgh, told the Socialist: "We are getting a lot of support from the public and from some MPs. Even our customers understand why we are on strike and fully support us. There's strength and unity within the engineers. We will continue to stand firm together as we believe it's important to stand up against this immoral use of fire and rehire."

"We don't want to be in this position we would rather be serving our customers. But the business has been totally immoral in the way it has approached things. So, we now have to step it up. During February we are taking four-day actions every weekend from Friday to Monday.

"Any support and solidarity from other trade unions is welcome because unity is strength, and it could be your workplace tomorrow. We all need to come together to stop fire and rehire and make it illegal."