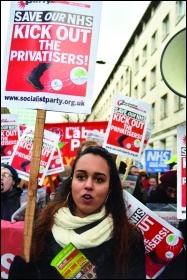 In the middle of the Covid pandemic, a leaked government draft white paper has revealed the Tories' plans to reorganise the NHS in England. It has been trumpeted in the press as a reversal of "controversial privatisation policies" introduced by David Cameron in 2012, and that the government is 'taking back control' of the NHS.

Despite the heroism of NHS workers, the years of underfunding, understaffing and privatisation of the NHS have left it struggling to cope with Covid. Nine years ago, the Con-Dem coalition government's Health and Social Care Act increased the fragmentation and privatisation in the NHS, and devolved some of the powers of the health secretary to unelected quangos. But this just continued a process that began with the introduction of the 'internal market' under a previous Tory government and was massively accelerated under Tony Blair's Labour.

The white paper in effect accepts the failure of the 2012 Act - that it increased disintegration in the NHS - and says: "In practice, the NHS has not operated as the market intended by the 2012 Act".

However, is this Tory government really intending to reverse privatisation and increase accountability when it returns powers to the health secretary? Readers of the Socialist will know that will not be the case!

The experience of the government using the pandemic as an excuse to hand over more contracts to big business shows its real intentions. Billions have been handed to profiteering companies for track and trace, PPE, private laboratories, and private hospitals. The white paper says "there will continue to be an important role for voluntary and independent sector providers", in other words private companies.

The document proposes legislation to make 'integrated care systems' statutory bodies in the NHS, including the participation of 'voluntary and independent sector partners'. These are bodies that are already being developed by NHS England to take over the commissioning of NHS services from the ones set up by the 2012 Act, and will also be part of a further privatisation process.

A few years ago, Leicester Socialist Party members played a key role in a massive campaign to save the Glenfield Children's Heart Centre under threat from the biggest quango of all, NHS England. We won that campaign, but there is no doubt, despite 'independence' from the government, they were working to its plan. Now, through the Save Our NHS Leicestershire campaign, we have been fighting the undemocratic local NHS bodies' plans to reorganise our hospitals, including the closure of one and an inadequate bed provision for the future.

'Bringing back control of the NHS' to this Tory government will not result in real accountability! We need the NHS to be genuinely democratically run by elected and accountable committees including service workers and users. But to do this we also need to reverse all privatisation and have a properly funded and integrated NHS - nationalising private health care, the medical supply industry, and the pharmaceutical companies.