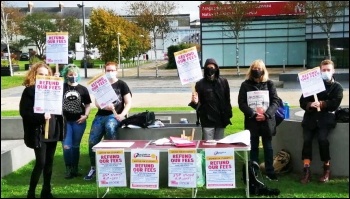 Socialist Students in Wales initiated rent strikes in Bangor and in Swansea at the beginning of term. Students taking part have withheld hundreds of thousands of pounds of rent from universities. So far we have won rent refunds for students who have not returned to their university accommodation because of Covid-19. We have also won £40 million in funding from the Welsh government for universities.

Socialist Students is organising on the ground - leading and supporting rent strikes. We are playing an influential role in the student movement at a time when it is crucial. Moving into a period of economic crisis, workers and young people are going to be asked to pay the price. Socialist Students can play an influential role in the ongoing campaigns against cuts on campuses, and against all attacks on workers and young people.

Come to Socialist Students conference to help build the network of socialists in schools, colleges and universities - to fight for free education and a decent future for young people.