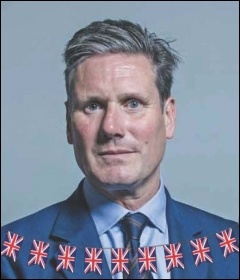 Keir Starmer's 'new management' Labour has just taken a further right turn away from the traditions of the labour movement. In place of working-class solidarity and socialism he wants to compete with Boris Johnson and Nigel Farage in nationalist flag-waving to win votes.

Starmer lied that he would keep Jeremy Corbyn's manifesto policies in order to dupe party members to vote for him as leader. But now he has abandoned them without offering any alternative but 'competence'. That's why Boris Johnson remains in office despite all the chaos, deaths, recession and U-turns.

Labour faces losses in the coming May elections. Devoid of policies which might upset the Tory press, he's desperately waving the union flag like a magic wand.

His research department, aided by a private brand agency, has spent much time and money to discover that working people in former safe seats appear to be confused about "what we stand for, and what our purpose is, but also who we represent" (short answer - running capitalism).

Voices from focus groups: "He needs to stop sitting on the fence", "not being forthright and honest about where we want to be", Labour is "two different parties under one name".

So a meeting with party officials has come up with a cunning plan of how to win back working-class voters: "The use of the flag, veterans, dressing smartly at the war memorial, etc, give voters a sense of authentic value realignment".

Within an hour, senior officials sent out the message: "Please prioritise the union jack (sic) header images, not the plain red ones." And with one WhatsApp message a century of struggle by generations of workers for social improvement and equality was administratively discarded. Will it now be illegal to sing the Red Flag?

Authentic? This stinks of opportunism. One staffer present reported: "They don't believe any of this stuff; they're saying whatever they think will get them votes."

They suddenly want to pose with veterans? What if those ex-service men and women are homeless - will they build them council houses like in the 1950s and 1960s? If they have been made redundant by cost-cutting Labour councils, will they and their mates now get their jobs back?

If they are being exploited on low wages and rubbish conditions by an outsourcing company privatised by Blair-Brown, will it be nationalised to raise wages and conditions? If they suffer chronic health problems, will they now be cared for with dignity without the need for charity? If these veterans and their workmates are union members, will Starmer finally repeal Thatcher's anti-union laws and stop spying on them?

Cumbria Socialist Party has several members who are ex-servicemen. They will be sickened by this cheap trick to politically exploit them and their comrades. They joined us to build a genuine workers' party and fight for socialism.