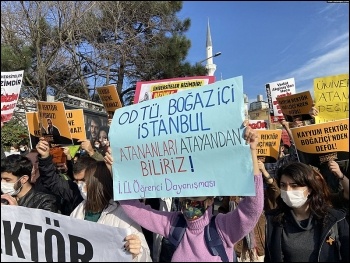 Demonstrations have been continuing at Bogziçi University since January 2021. Students and university staff are resisting President Recep Tayyip Erdogan's appointment of a government loyalist, Melih Bulu, as rector.

The reason for appointing a rector at Bogaziçi University is that there is a strong leftist student community there. The students, who have been the target of the AKP (Justice and Development Party) government for a while, took action against the Turkish army's operation against the Kurds in Syria in 2018. Appointing an AKP rector at the university shows that Erdogan wants to have control over any possible protest.

This anti-democratic manoeuvre echoes the dismissal of pro-Kurdish HDP (People's Democratic Party) mayors and the appointment of trustees to replace them. In addition, it is a continuation of the dismissal of thousands of civil servants and academics by decrees since 2016.

All students who participated in the protest movements against Melih Bulu's appointment, including rallies and demonstrations, were arrested during night raids of their homes. They were abused and beaten because they defended democracy in the face of repression. Even today, the university is surrounded by snipers, and 'anti-terrorist' crackdowns are carried out against students protesting. As solidarity with students grew in the country, police arrested 159 protesters.

Recently, as part of the protests, four students hung a painting covered with an LGBT flag at the University of Mecca. The AKP accused students of "deviance" and "incitement to hatred" and they were arrested. The AKP government uses all means to end the protests, incite public hatred of these students, and insult LGBT people.

President Erdogan and his party fear that these protests against his authoritarian rule will get bigger as the social situation in the country gets worse. According to official figures, unemployment is over 15%, and the rate of inflation is estimated to be above 30%. The living standards of the population are falling sharply day by day.

The march of hundreds of miners in Kayseri demanding an increase in their salaries is another example of social discontent. Students must unite with the working class, the only revolutionary class in society because of its role in production and distribution.

The students have been supported from the beginning by HDP MPs and the TIP (Workers Party of Turkey).

The Republican People's Party (CHP), which describes itself as 'social-democratic', has shown its limitations as the largest opposition party to the AKP. Indeed, most of its deputies, representatives, and spokespeople have not taken the trouble to support the students.

CHP spokesman, Faik Oztrak, tweeted against LGBT students about their work of art, calling it a "vile provocation" and an attack on the "sacred values of humanity". The CHP continues to play the role of supporting Erdogan's regime. It is no hope for the students and workers of Turkey!

Erdogan's pro-capital policies target both the working class and the youth. The capitalists, a minority in society, get richer and richer while workers suffer.

Today's students are tomorrow's workers! Workers and students must support each other and together fight for socialism, against authoritarian regimes, and against capitalism.

The Committee for a Workers' International (CWI) stands in solidarity with Bogaziçi University students and university staff.