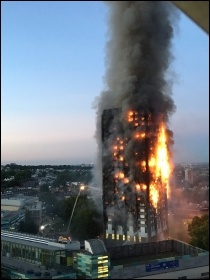 The Grenfell Tower blaze has killed many and destroyed the homes of many more, photo @Natalie_Oxford (Twitter)   (Click to enlarge)

Despite the horrific scenes at Grenfell almost four years ago, around 700,000 people in the UK are still living in buildings fitted with combustible cladding. The government has announced £3.5 billion to fix dangerous cladding on high-rise buildings.

This falls far short of what is needed. Parliament's own fire-safety committee estimated the removal cost to be around £15 billion.

This fund is restricted to buildings of at least 18 metres, typically six storeys. It would not cover buildings between four and six storeys, such as Samuel Garside House in Barking, which burnt down in 2019 after wooden cladding allowed a fire to spread across the whole block.

Those residents would be expected to contribute towards costs. Residents in buildings below four storeys would not be covered at all.

This fund can also only be used to replace and refurbish cladding, despite a key factor in Grenfell being the lack of fire safety measures, such as sprinklers. It will also do nothing to ensure properties are habitable.

The English Housing Survey revealed that 17% of households, 4.1 million people, live in properties classed as 'non-decent'. Although your property may not burn down, it may still be damp, overcrowded and unliveable.

Large housebuilder Taylor Wimpey, for example, estimates profits of over £650 million this year. So you would expect extra taxation on big housebuilders to easily cover the cost of this fund.

However, a new levy on developers will only contribute £2 billion over ten years. The rest will come from general taxation.

Why should ordinary people, who have been forced to live in unsuitable and dangerous accommodation, be forced to subsidise the cost-cutting of developers earning huge profits?

Living in safe housing should be a right, not the ability to make money from it. Despite being a thriving industry with huge profits, capitalism seems completely unable to provide decent affordable homes for working people.

Only by taking housebuilding out of private hands, and into public ownership, can we provide safe accommodation for all.