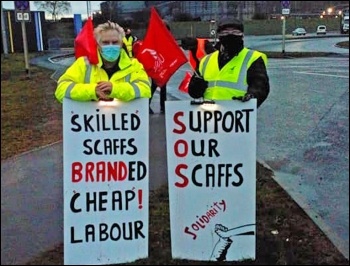 Around 50 scaffolders, members of Unite employed by Brand Energy at Scunthorpe steelworks, are now in their fourth week of strike action.

They are striking for the industry-agreed Blue Book rate of pay, roughly a £2 an hour increase.

Having already taken three weeks of 48-hour strikes, they have ramped up the action to three days of strike action. This is to hit Brand, who are losing the contract, and send a clear message to the new contractors Activo that the scaffs are serious about getting the rate for the job.

This has forced Activo to offer talks in advance of starting the contract in March.