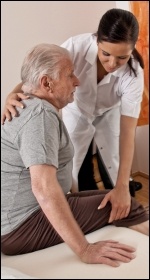 When Boris Johnson became prime minister in July 2019, he promised to "fix the crisis in social care once and for all". A recent government white paper shows we are yet to see any meaningful action.

The white paper is centred around the NHS (see socialistparty.org.uk), with an intention to address "separate proposals on social care reform later this year". Beyond the rhetoric and sparse mentions of social care are alarming structural changes that must be opposed.

The government is handing itself powers to make payments directly to private care providers, rather than just not-for-profit services as currently allowed. This opens the door to central government bypassing local authorities in order to pay profiteering private companies.

The government does not intend to reverse the commercialisation of the sector, which has bloated to at least 89% of home care being provided by the private sector, from just 5% in 1993. The proposals around integration will further align the NHS with the failing social care model. For-profit care and housing providers will be allowed, under the new proposals, onto new boards set up to link health and care.

Talk about better use of technology and data is meaningless without a major increase in funding to address the ageing population and the £8 billion-plus shortfall since 2010.

There is an urgent need for better working conditions for care workers, more social workers and the increased availability of high-quality care provision. The proposals for greater scrutiny of local authorities, via inspections from the Care Quality Commission and the possibility of central government intervention, will also do little to address these issues. It will only put greater pressure on workers already struggling with limited resources.

Those who require care and support know their needs in depth, while workers have the professional expertise to address meeting these. It is this exchange between workers and service users that defines care.

We should be the people who have a leading role in determining policy via democratically elected bodies representing workers and people with care and support needs - giving us the power to determine what resources are required and how they should be provided.

Social care provision must be brought back in-house, out of the hands of unaccountable private interests who put profit above people. This would ensure high-quality, free social care - with decent working conditions - to be available to meet the needs of all who require it.