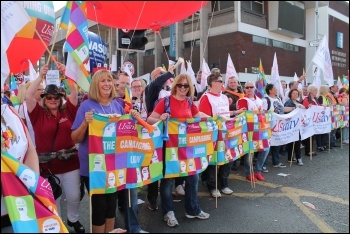 Usdaw held elections for union President and Executive Council with results being announced on Monday 15th February. On the same day that the results were announced, serious concerns were raised by members about the drop off in turnout. Whilst some members argued that turnout percentages weren't that far off the 2018 elections, the percentages alone don't tell the whole story.

Socialist Party member and current union President Amy Murphy, was elected with 9,566 votes in 2018 with a reported turnout of 4.9%. Jane Jones, the preferred candidate of the right wing, was elected with 7,505 votes with a turnout of 4.3%, so even comparing the figures shows a drop in turnout and 2,000 fewer votes returned for the right-wing's choice, with 5,000 less voting in the Presidential election. Whilst a drop in membership goes some way to explaining the lower number of votes cast, it does not explain the drop in turnout.

That the election has taken place in the midst of another nationwide lockdown hasn't helped turnout with candidates being unable to reach members and campaign for support and wider participation. We warned back in September that going ahead with the elections would likely lead to a democratic deficit and made it clear that the union leadership needed to provide support to ensure that branch democracy was fully functioning as some branches haven't met since the pandemic began.

As it was, guidance on how to use Zoom for online meetings only appeared in Network, Usdaw's magazine for reps and activists in December, after the nomination period for the election closed. With, in effect, reps engaged in guerilla warfare with management over safety in stores, distribution centre, manufacturing and transport, then the election will not necessarily have featured high of their agenda.

Just 1.95% of Usdaw members voted for Jane Jones, with her only managing to secure 48% of votes cast for President. However, there was also a difference of nearly 17,800 between the number of members in January 2021 (402,111) and number of ballots issued (384,317). Even if this is down to people joining the union online, or moving house without providing a new postal address, its staggering that more people were cut out of the vote than took part in the vote for President.

But this isn't just a problem linked to the difficult conditions of the pandemic, it stems from the way Usdaw's leadership treats lay member democracy as a nuisance rather than a potential strength of the union. It is almost impossible for many rank and file members to find out where their branch holds meetings and how to attend, an already difficult prospect given how common 24/7 working in retail and distribution has become, and the often large geographical nature of many branches. The Activist will be producing a charter for lay member democracy in Usdaw to start a debate within the union on this issue.

Left challenge to 'tripartite' policies of the right

Despite a crowded field with 5 people running for President, Andrea Watts, the Usdaw Broad Left candidate for President, came second scoring over 1,500 votes more than the next candidate. This is even with a relatively muted campaign due to Andrea suffering a bereavement early on in the campaign cycle.

Socialist Party member and Usdaw Broad Left candidate Ryan Aldred, challenging the South Wales and Western seat came within 180 votes of getting elected and managed to secure 252 more votes than one of the incumbent EC members. As it stands, the right-wing have made gains through these elections with no Broad Left members being returned to the EC (3 sitting Broad Left EC members stood down in the election). However, the overall lack of turnout is an ongoing symptom of a membership that is less than enthusiastic about the current strategy employed by the right-wing.

Usdaw General Secretary, Paddy Lillis, has consistently put forward a partnership or tripartite process, trying to work constructively with the Tory government and bosses through the British Retail Consortium. Despite lobbying from Usdaw about tightening up legislation around shop workers facing abuse the Tories have refused to cooperate even on that limited reform. Similarly, the Tories attempted to ease up Sunday trading laws and only backed off when a groundswell of anger from below stayed their hand with a survey of Usdaw members declaring that 92% were against extending Sunday hours. Evidently, the Tories have not been willing to reciprocate in this tripartite process.

Similarly, bosses have been less than keen to work constructively with the union. Sainsbury's/Argos which has a recognition agreement with Usdaw put 3,500 jobs at risk despite paying out two lots of dividends to shareholders in 2020 which was reported a bumper year for sales across the supermarket sector. Tesco, another employer which recognises Usdaw is attempting to employ a fire and rehire tactic at its distribution centres.

A recent victory in the Scottish courts has for now halted the attack on conditions at the Livingston site but workers in Litchfield, Daventry clothing and Avonmouth Tesco distribution centres are still affected. Imagine if, instead of simply relying on action in the courts alone, Usdaw broke with the partnership approach and balloted members for strike action to decisively oppose the rolling out of these measures. The fact that Tesco have been willing to launch such an attack on terms and conditions clearly demonstrates their disdain for partnership with the union as they are happy to break with the partnership agreement when it suits them.

The newly elected leadership won't enjoy a long honeymoon period and will quickly be tested in an increasingly volatile situation. On the one hand, attacks will continue in the non-essential retail sector as bosses seek to make savings by stripping back on staff with tens of thousands of jobs at risk of redundancy already. On the other, supermarket workers who have worked tirelessly throughout three lockdowns will increasingly be asking where their share of the profits are in a sector that has done well. Supermarket workers have attained the status of key workers throughout the pandemic but receive wages close to the minimum. Casualisation remains rife throughout the retail and distribution sector with more and more people employed on zero and low hours contracts. All of these people will be looking for a fightback.

There is a growing disquiet in the union that not enough has been done to oppose redundancies up to this point and members won't simply tolerate further attacks to job, terms and conditions. An important gain throughout these elections has been the recruitment and consolidation of members of the Usdaw Broad Left with Socialist Party members playing a key role in campaigning for the Broad Left. New members have been attracted to the call for a democratic, fighting leadership in Usdaw particularly with Paddy Lillis clamping down on union democracy at this year's Annual Delegates Meeting or ADM (union conference).

With membership of the union's Broad Left increasing, we have an important role to play to challenge the leadership to push for the fight that is needed to both defend jobs, end casualisation and demand more for key workers. With increasing Broad Left membership it puts us in good stead to challenge future elections but we must waste no time in pushing to transform Usdaw now. It is vital that the Usdaw Broad Left now comes together to prepare for our intervention for ADM.

Attempting to work constructively with the Tories and the bosses will continue not to work. Socialist Party members in Usdaw have made it clear that retail jobs need defending including issuing calls for public ownership. Workers need £12 an hour minimum wage now with hazard pay for key workers working through the pandemic with a campaign of industrial action to achieve it. We need a sustained campaign to end zero and low hours contracts and we need a party that will represent workers as Keir Starmer continues to snub the unions. Support for our ideas will continue to grow, can the right-wing say the same?