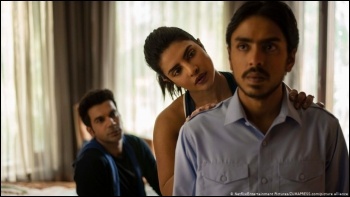 The protagonist, Balram, narrates his life as it unfolds from when he is a child. He is a studious and ambitious child who reads books under an oil lamp, while the rest of his family sleep cramped in one small room. When his father is unable to pay the local goon - the 'Stork' - Balram is forced to leave school and join his brother working at the tea stall.

The film highlights the financial responsibility males can be expected to take on, not only in rural India but all over the world, to be able to provide for their family. A gender role that capitalism has embedded, especially in South Asian culture.

In order to get a job working for the Stork's family in the big city, Balram has to endure prodding questions of his caste, religion, and family place of residence. He lands himself the job for 1,500 rupees a month, equivalent to £15. In order to improve his position, Balram exposes the Muslim identity of a colleague, whom he is envious of, to get him fired.

The current Hindu nationalist government of the BJP, under the leadership of President Narendra Modi, carry out similar divide-and-rule tactics against Muslims. They blame them for the problems in India, to hide the greed and corruption of the bosses and government; the root causes of the stark poverty in India.

Throughout the film the narrator refers to the rooster coop analogy, where roosters are caged together in large numbers but do not revolt even when they see that slaughter is ahead. This is compared to the working class in India which has the power to overthrow the bosses, but through systematic conditions put in place by capitalism, the working class lacks the confidence that it is possible to do so at this stage. And so, workers carry on acting as slaves to their masters.

The film introduces 'The Great Socialist' who comes from a lower-caste family and rises to be the next president. But like many of the leaders of opposition currents in present day India, the Great Socialist helps the capitalists evade taxes, while lining her own pockets. This can be compared to other liberal capitalist parties around the world, who use identity politics to give the hope of reformation for the lives of the working class, but in reality do not fight for a political programme that can have a positive impact.

The film takes a turn when Balram is forced by his bosses to sign a confession taking full responsibility for manslaughter; he feels like he has "served his duty by the master". The detachment from one another within the capitalist system is stark, as the film reminds us. Although Balram has more in common with the little child from a poor background who was killed, he chooses to defend his employers, who abuse him, verbally and violently, throughout the film.

The harsh reality of the issues facing India are brought into the limelight by the film. We see glimpses of the Hindu nationalist views in India, the objectification of women across classes, the corruption that runs rife in any capitalist system but is prominent among the Indian ruling class, and the caste-based oppression that is evident in everyday society.

Balram correctly points out that although there are more than 1,000 castes in India, there are only two that really matter: those who have a big belly and those who have a small belly. The capitalist class, and the working class.

Balram's story resonates well across India. Often young people leave their village with hope for a better life in a big city, only to find that there are few jobs available and they are threatened with unemployment when they get poorly paid work. Unlike films that tell the story of a person from the slums who, through intelligence and hard work, can become successful and escape their situation - this film indicates that the reality of success for anyone not born with a silver spoon is far more horrific.

The film ends alluding that Balram has escaped the coop - no longer the rooster, but the master. However, it does not point out the obvious.: that the masses can overthrow their masters, and even capitalism if they struggle in solidarity on a mass basis.

To fight oppressions of any kind we must unite on a class basis, fight for and defend our rights, to defeat nationalism, racism, and divide-and-rule tactics which are all products of this wretched capitalist system.