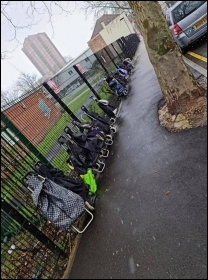 I'm heartbroken to see it, but that's not enough. What are we going to do about the do-nothing council, which insist that it's helpless in the face of cruel cruel cuts? We need an alternative, and that absolutely isn't the Tories. A no-cuts alternative.

Tory-led Wokingham Borough Council has decided to increase the care costs for my severely autistic son. Originally there was no charge, then around £25 a month, but now it's gone up by a whopping 436%. Another reason to vote for anti-cuts candidates in the coming elections. Why should the most vulnerable in society pay for a funding crisis created by the banks and the super-rich? The increase in wealth these people have had since the start of the pandemic could pay for social care many times over.

"I am writing as secretary of the Wales steering committee of the Trade Unionist and Socialist Coalition (TUSC). TUSC is a registered political party and will be standing candidates in the forthcoming elections to the Senedd (Welsh parliament) on 6 May.

We note the current legal prohibition on door-to-door leafleting for the election and wish to lodge our protest at what we consider to be an attack on a fundamental democratic right - namely the right of political parties to campaign and disseminate its policies.

We do not want to be forced into a position where we have to break the law in order to defend a democratic right, but we shall not be deterred from doing so if necessary."

One attendee at the National Shop Stewards Network meeting (see 'Online workers' rally: Taking fight to the bosses' at socialistparty.org.uk) said: "I'm in hospital recovering from surgery, but still attending this meeting. Every single member of staff who has come to see me today has been given a round-up of this meeting, and I have urged all to join a union."