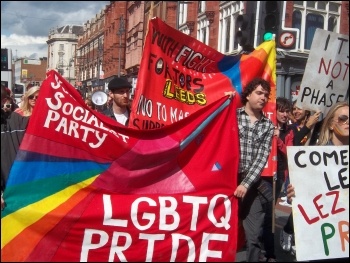 'Rainbow capitalism' is the term given to the corporate bandwagon-jumping of brands using the iconic gay pride symbol - the rainbow flag - to decorate their products during 'Pride season'. In 2017 Skittles chose to "give the rainbow" back to the community by selling white sweets instead of their usual multi-coloured ones.

While the notion of white Skittles might be riveting for some, this and widespread 'rainbow washing' is a hollow attempt at trying to cover up big businesses' true intentions: to sell more products during a period that is meant to commemorate the Stonewall riots and the rainbow symbol that is about the true, diverse, working-class history of LGBTQ+ struggle.

The class divisions within the LGBT+ population were highlighted to an extent by these events. Richer LGBT+ people were reported to "characterise the events at Stonewall as 'regrettable,' as the demented carryings-on of 'stoned, tacky queens' - precisely those elements in the gay world from whom they had long disassociated themselves."

Many people are unaware that the Stonewall Inn was a bar in New York owned by the mafia. Marc Stein reported: "Most of its patrons were working- and middle-class whites in their teens, twenties, and thirties, but there was a significant presence of African Americans and Latinos as well. Gay men, drag queens, street queens, transsexuals, sex workers, and others who transgressed gender and sexual norms frequented the bar, as did a small number of lesbians.