Super-rich laughing all the way to the bank

Jobs and services still under attack

A social tsunami threatens Britain. Two million workers are already officially on the dole and five million more on furlough, facing an uncertain future when the scheme ends. But the Tories are intent on bailing out the rich again.

500,000 are officially living in destitution. Nearly a million renters who have lost their jobs or incomes face eviction as the Tories cut the temporary increase in housing benefit.

And although headline government announcements seemingly spare spending cuts on health and education, council services are set to be hammered again. Even with a crippling 4% rise in council tax, adult social care services, along with other services, will require an additional £1.6 billion of funding just to stand still, let alone restore the funding axed during the last decade.

Emergency action is needed to protect jobs and wages. But instead, Tory chancellor Rishi Sunak intends to shore up profits and wealth. The government wants to make us pay for the crisis as the economy recovers from the Covid crisis, while the rich laugh all the way to the bank.

The day before the budget, billionaire hedge fund speculator and former boss of the current chancellor, Sir Christopher Hohn, paid himself a dividend of £345 million, one of the largest-ever annual personal payouts in the UK.

And the bosses have seen the economic crisis as an opportunity to force down living standards and boost future profits. British Airways, for example, is sitting on billions of pounds of reserves but has used the crisis to fire 42,000 workers and rehire them on permanently reduced wages. Likewise, British Gas is using the pandemic-induced crisis to 'fire and rehire' its 7,000 engineers on worse pay and conditions. 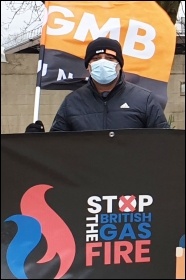 Sunak's tax-free 'freeports' will allow bosses to intensify the exploitation of workers further.

Big business and the wealthy are hoarding the cash that could pay off the debt. Billions were handed out in rip-off contracts for PPE and medical supplies for products that never materialised or were useless - blatant gifts to the Tories' friends and party donors.

Sunak can afford to marginally raise corporation tax and still keep the lowest tax on profit in the advanced world. Tory reductions in the tax have cost public services £12 billion a year.

The working class needs a political opposition to this one-sided class war being fought by the bosses and the Tories. A sustained campaign can force the Tories to back off from cuts.

But don't hold your breath waiting for Keir Starmer to make the rich pay for the crisis. Labour's right-wing leadership is opposed to taxing the super-profits of the super-rich.

The trade union movement must prepare to lead the fight to defend living standards - involving the unemployed, precarious workers and renters to resist the Tory and bosses' attacks. But it must also back a real political alternative to the two bosses' parties.

A first step would be to support candidates from the Trade Unionist and Socialist Coalition - which the Socialist Party participates in - who will be making a stand against all cuts in the May elections (see tusc.org.uk).