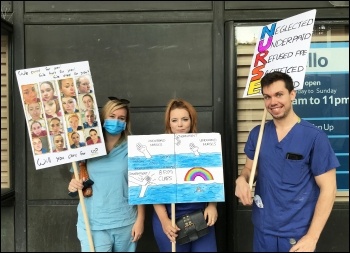 Working-class women have suffered enormously during the pandemic. We've been disproportionately hit by job losses, pay cuts, and the additional burden of home schooling and childcare. But the Tories have recently been forced to make some concessions on women's healthcare and reproductive rights as they attempt to limit face-to-face medical appointments.

Doctors have been able to prescribe the abortion pill over the phone to be taken at home (see socialistparty.org,uk) and a consultation has recently been launched regarding over-the-counter sales of progesterone-only contraceptive pills in pharmacies.

If the outcome is favourable, this would be a positive step. However, the pills should be free in order to guarantee access to all women, not sold at inflated prices as has been the case with the 'morning after' pill.

It has also been announced that the NHS is rolling out a trial of home smear tests. Up to 600,000 smear tests - for cervical cancer - were cancelled in April and May last year because of coronavirus.

Even now that testing has resumed, many women are facing a long wait as the NHS buckles under the pressure of the pandemic. And many more women are avoiding booking their test altogether out of fear of catching coronavirus.

Home tests are less invasive and uncomfortable than the traditional test and a follow-up test will be performed by the GP if abnormal cells are detected. They don't involve the speculum, an instrument used during internal examinations. It's unpleasant and can be extremely painful - and is also a major reason why so many are reluctant to have a smear test. Before the pandemic, around 1.5 million tests were missed annually, mostly due to embarrassment and fear of pain or discomfort.

But it seems the problem with the speculum isn't so much the instrument itself as the way it's used. Medical professionals are often quick to dismiss women in pain as hysterical or exaggerating, and when they do believe women, there's an expectation that they should grit their teeth and bear it. Clinicians simply listening and agreeing to pause or end painful examinations would go a long way to reducing skipped tests.

The accuracy of self-administered smear tests is not yet clear, and must be established before they become more widely used. But if they can accurately detect abnormal cells they, like the other measures which give women more autonomy over their bodies, must be made a permanent option. We cannot allow the small improvements which have been made to disappear when the pandemic ends.

THIS IS A TEST FORM