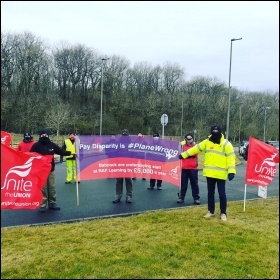 Over 50 workers on a Babcock Aerospace contract for operational and engineering services at RAF Leeming, north Yorkshire, have been taking discontinuous action since 20 January, escalating to two days of strike action at a time.

Management refuses to accede to the demands for shift pay parity with workers doing similar work at RAF Valley on Anglesey, a difference of up to £5,000 a year. So the workers, organised in Unite, are escalating to three days' strike action a week from 2 March.

Most of the workers are ex-forces, and as one worker told me on the picket line on 23 February: "Striking doesn't come that naturally to us, it's taken quite a lot to force us to get to this point". Another striker explained more bluntly: "Management don't give a shit about us!"

The workforce remains solid, with a sizeable proportion of those on strike each day joining the picket lines. The position of the workers will be boosted by the newly awarded contract for maintenance of Hawk training jets for the Qatari Emiri Air Force in the hanger directly next to the Babcock workers. This contract pays better rates than those the Babcocks workers are on, and many workers will be considering applying for those jobs.