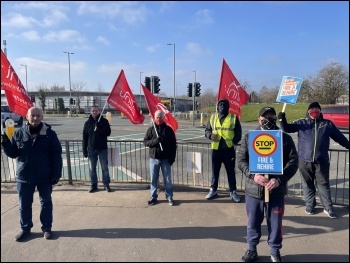 Socialist Party members supported the hundreds of bus drivers in Manchester who are on strike over proposed changes by private company Go North West. The picket line at Queens Road was big, loud and solid.

Unite union, which represents the 400 drivers at the firm, said the company planned to "fire and rehire its workers on vastly inferior contracts." 82% of the workers voted to strike.

Unite rep Lawrence Chapple-Gill said: "There were some things that we were working on with the company prior to Christmas, which amounted to over £1 million that we offered up as a contribution towards the turnaround plan."

"As a consequence, Unite has had no option but to call its members out on strike.

"This will inevitably cause a great deal of disruption throughout Greater Manchester and beyond, but I hope that passengers appreciate that Unite took this action as a last resort.

"If Go Ahead were allowed to implement its fire and rehire policies it would result in our members, who have been in the frontline since the pandemic began, having to work longer for far less money.