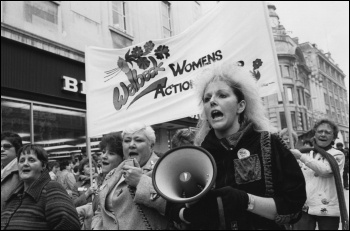 8 March this year marks the 110th anniversary of International Women's Day (IWD). Over the years there's been a sustained attempt to remove the socialist origin of the day and for it to become a day of individual celebrations.

Although it is not a bad thing to raise awareness of individual achievements of women throughout history, it's important that this day continues to play the role of bringing together socialists and trade unionists to fight against both women's oppression and against capitalism.

International Women's Day was proposed by Marxists: Clara Zetkin and others at the Second International Women's conference in Copenhagen in August 1910. The first IWD was subsequently held on 8 March 1911 with demonstrations in Austria, Denmark, Germany and Switzerland. Women's suffrage was a key issue of the day but not the only one.

Internationally, in a whole number of countries, there had been a rise in the movement for the vote and also an increased militancy amongst women workers. In Britain, the late 1880s saw the birth of 'new unionism' and the growth of 'general', more militant unions organising amongst 'unskilled' workers.

In the Bryant and May match girls strike in 1888, 1,400 women workers went out on strike for safe working conditions, a shorter working day and better pay. In 1906, there was a strike of non-unionised Jute workers in Dundee. In 1910, Cradley Heath women chainmaker's took strike action over low pay and poor working conditions. This is to name only a few of the disputes at the time.

This protest was followed by the 1909-10 'Uprising of the 20,000'. This was a strike of workers in shirtwaist factories in New York - the largest strike of female workers in the US at that time. The 1908 protest inspired the Socialist Party of America to call a national women's day, which may have been the inspiration for Clara Zetkin and other socialists to call for an International Women's Day to unite these movements on a global level.

International Women's Day has historically been a day of struggle. The most well-known was in 1917 when textile workers in St Petersburg in Russia walked out on unofficial strike action calling for 'bread and herrings' on the back of food shortages and poor living conditions.

These women also called for the metalworkers to go out on strike, not just over bread but also against Russia's involvement in World War One. This led to the 'February Revolution' (IWD was 23 February according to the calendar used in Russia at the time).

In more recent times we've seen the day become a focal point for struggle again. Since 2017, there have been large protests and some strikes in opposition to violence against women and to defend and improve abortion rights.

In the US, on the back on the women's marches in January 2017, IWD saw large protests against the Trump administration. In 2018, 5.3 million workers went on strike in Spain over gender inequality and sexual discrimination. This is to name but a few of the global movements.

110 years after the first IWD, women are still struggling under capitalism as the Socialist Party's programme for women's rights and socialism on the previous pages shows.

As we've seen in recent strikes - such as those of the Glasgow care workers over equal pay, the Birmingham care workers and the workers who took strike action against 'fire and rehire' at Labour-run Tower Hamlet's Council, and many others - women are already drawing these conclusions.