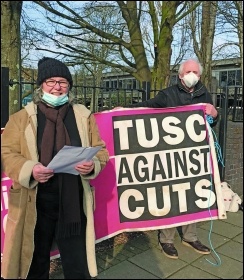 London was put into 'major incident' status on 8 January, with Covid-19 infection rates and hospital admissions soaring. Frontline workers have consistently paid the price. 57 Transport for London (TfL) staff, mostly bus drivers keeping the city moving, have lost their lives so far. They have had to fight for basic safety for a year and some, including Socialist Party members, have been suspended as a result.

A recent RMT survey found 60% of bus workers thought their employers, the private contractors who run London's 700 bus routes, "had taken no additional steps to protect staff safety since the emergence of the more infectious strain of Covid-19".

This is a shocking stain on Labour Mayor Sadiq Khan, who is also chair of TfL. We all remember him making the most of his dad being an ex-bus driver when running for office - but where's his love for workers now? In October, deep into the corona crisis, Khan agreed a government 'support' package of violent cuts to TfL services and staff pensions.

And now Khan announces plans to hike Londoners' council tax by a whopping £100 a year. This is in a city of millionaires and billionaires, who Khan has openly courted. How exactly are workers and families, facing wage cuts, furlough and mass redundancies, supposed to find the cash?

With Khan firmly in the pocket of big business, there is the urgent need for working-class political representation in London. The Socialist Party is preparing to stand as part of the Trade Unionist and Socialist Coalition (TUSC) in the Greater London Assembly elections in May.

It is an opportunity to challenge the Tories, Labour cutters and the capitalists they serve, at a time of intense class anger. London bus drivers represented by Unite are striking over cuts and conditions, and more industrial action will surely follow (see 'Bus workers under attack and fighting back'). TUSC supports these and all strikes in the interests of workers' lives and livelihoods.

The Socialist Party is calling for a campaign to get socialists into city hall. We are appealing to all workers in struggle, the trade unions and other community activists to join our campaign. To stand as candidates, and to help raise the £20,000 needed to stand for London mayor. The fightback begins here.